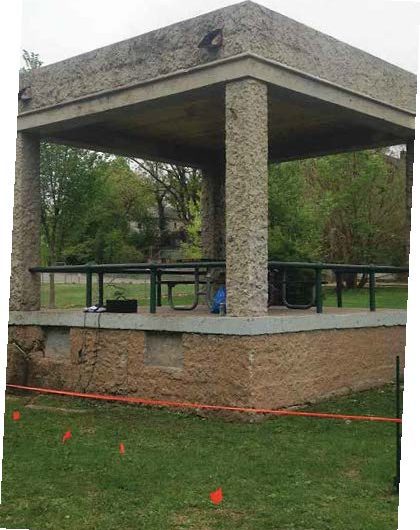 An exploratory plan to build a new bandstand at Langford Park met with mixed reviews at an initial neighborhood meeting convened by the plan’s proponents, the 4th in The Park Committee.

The 4th in The Park Committee, which holds various events at Langford Park on July 4, said a new bandstand could better meet the needs of the community band and other groups, providing them with more space, a place for a screen to project movies, accessibility, water, electricity for amplification and decorative lighting.

But some residents, like Phill Duff and Lydia Midness, raised concerns about the 4th in The Park Committee’s tentative plan. Duff contended it would be a “misstep” if the bandstand were torn down, noting the 107-year-old structure is historic and the last of its kind in the city.

Midness said she is concerned about the park losing more green space, noting there has been “over time an encroachment on green space.”

But other residents at the meeting, like Janet Lawson and Bruno Bornsztein, said they can see the need for a new bandstand. Sometimes the neighborhood is a bit too reticent to embrace change, Bornsztein said.

Meanwhile, Lawson, executive director of the summer youth theater troupe Shakespeare in St. Anthony Park, said the current bandstand is neither beautiful nor useful. A new bandstand “is something we could take pride in,” she said.

While the 4th committee has met with the Saint Paul Parks and Recreation to discuss a possible project and it has very preliminary architectural drawings on what a new bandstand might look like, Becerra assured neighbors nothing is definite, at this point.

“We are seeking [neighborhood] opinions,’’ he said. “We know there are differences of opinion and that’s OK. But can we move ahead on something that would be good? We are planning more meetings.” For further information, check out the 4th in The Park’s website at http://www.4thinthe park.org/Bandstand-Project.php