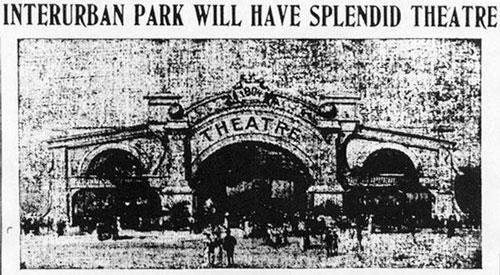 Community says no to amusement park—in 1904

Murky though the newspaper reproduction was, one gets a sense of the “high-class” vaudeville theater planned for the St. Anthony Park site. (Minnesota Historical Society)

A century ago, St. Anthony Park residents were up in arms over promoters’ plans for an elaborate amusement park near what is now the junction of Como Avenue and Highway 280.

At a mass meeting in August 1904 in the old Central Hall at Blake and Raymond avenues, there was unanimous support for a resolution objecting to “… an undesirable and questionable place of amusement in the immediate vicinity of the United Norwegian Lutheran Seminary, which was induced to locate (here) partially because of its remoteness from such features.

“It would be also located in the same vicinity and on the same electric line as the state agricultural school, where hundreds of young men and women from rural homes are sent for their education,” it noted ominously.

Said one supporter, a “college professor,” according to the newspaper: “We have a quiet, orderly neighborhood and we wish to preserve it against the undesirable element that would be attracted.”

The clear suggestion was that con artists and purveyors of alcohol would flourish if such a park were built.

The early 20th century was the heyday of amusement parks across the United States, often developed by streetcar or “trolley” companies at the end of their lines to generate extra revenue, particularly on weekends and holidays.

The investors who wanted to build the Interurban Amusement Park in St. Paul didn’t own a streetcar line, but knew it was essential that they situate their attraction near one at a time when car ownership was rare. Their initial focus was along University Avenue.

Emerging as the company’s spokesman was George S. Porter, said to have helped develop Ingersoll Park in Des Moines, Iowa, and reputed to be “a well-known fireworks expert and manufacturer.”

“All the joyous hilarity of gay Coney Island … will fall to the lot of young and old in Minneapolis and St. Paul next summer,” declared the Minneapolis Journal in October 1903. Initially planned for University and Fairview Avenues, the park drew immediate opposition from nearby residents and the promoters shifted their focus to Snelling and University avenues.

But that site, too, was abandoned in early 1904 in the face of strenuous objections from Hamline University and Macalester College.

Undaunted, the promoters looked westward, and in March announced that they had secured the necessary land on the northeast corner of Raymond and University avenues.

One newspaper was naïve enough to state, “It appears there will be no further opposition.”

The very next day, it was announced that residents had organized the St. Anthony Park Citizen’s League specifically to fight the proposal. The proximity of the amusement park to Baker School, nearby on Raymond, was a particular sore point.

June came and went with no further news, but in July 1904 the St. Paul City Council passed an ordinance banning fences higher than six feet in the city, a move clearly intended to block the development.

No doubt exasperated, Porter and colleagues decided on a new strategy. They would shift their sights north to the Como-Harriet streetcar line and westward to find a location beyond the interference of city officials, and, not incidentally, city police.

The city limits of St. Paul and Minneapolis were not contiguous at the time and Porter secured acreage just outside St. Paul’s western boundary in Rose Township. He told reporters the park definitely would open in the summer of 1905.

While the citizenry fumed at this latest tactic and appealed for help from the Ramsey County attorney and commissioners, Porter disclosed plans for a 3,500-seat vaudeville theater on the site, claiming that prominent actors and animal acts already were under contract.

Details are sketchy, but it’s clear that construction was at least begun in the vicinity of Como Avenue and Highway 280, because it is known that workers in the employ of the Interurban Amusement Company were camped there in January 1905.

However, the park’s opponents had another card to play. The state senator representing St. Anthony Park during that period was Andrew McGill, a former one-term governor, who lived in one of the first homes built in the area at 2203 Scudder St. During the 1905 session of the Minnesota Legislature, McGill authored and secured passage of a bill that allowed St. Paul to extend its western boundary to bring the park site within its jurisdiction.

This was probably the final blow to Porter and his fellow investors who already had been outpaced by the developers of the Wonderland Amusement Park in Minneapolis. Located on the new Lake Street streetcar line, the 10 acres of attractions opened in May 1905 at 31st Avenue S. in Minneapolis.

Wonderland, “10 acres of fun for 10 cents,” was everything that Porter had promised and more.