More than 300 students at Como High School and Murray Middle School played in 11 athletic programs this fall and, win or lose, hopefully they have all benefited from that experience.

Through commitment and competition, we saw teammates develop chemistry that, in turn, fostered friendships, fun and character-building lessons for living. We saw positive intergenerational relationships emerge between caring, encouraging adults and motivated, energetic teenagers who together represented their school communities.

Regardless of wins and losses, school sports help students shine and gain education in an experiential setting. The journey of each team and individual is unique.

For the Bugle community, we offer a snapshot of the fall sports season and what 11 programs produced at Como Park High School and Murray Middle School.

Though they finished with a record of 2-7, the Cougars learned what resiliency could do for a team after beating Brooklyn Center 34-12 in their final home game. That win was realized after the team kept working through a challenging stretch against two opponents who both qualified for the state tournament.

Josh Ward and Morris Walker were key players on both sides of the ball for the Cougars and were selected to the Twin Cities All-District Team. Players receiving honorable mention honors are Alonte Johnson, Chue Chang, Alex Fusco and Khyri Lueben. 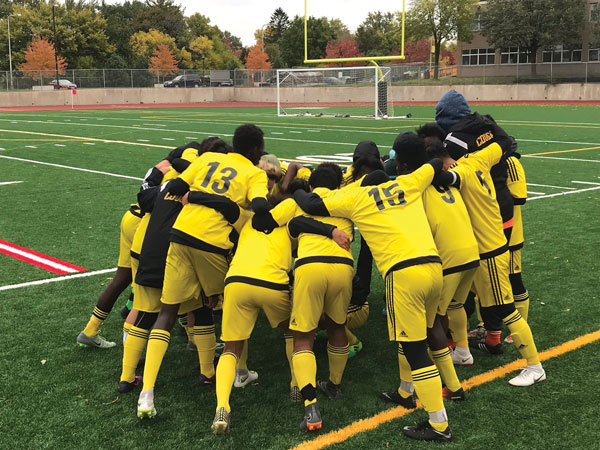 The Como boys’ soccer team held their traditional pre-game huddle before defeating
Mounds Park Academy in the first round of the Section 4A playoffs at Como on Oct. 11.
Photo by Eric Erickson

Boys’ Soccer — The Cougars clawed their way back to claim three come-from-behind victories over St. Croix Prep, Harding and Highland Park that will stand out as proud accomplishments for this year’s varsity squad. Overall, the Cougars completed the season with a record of 7-8-3, finishing 5-5-2 in the always-challenging St. Paul City Conference.

Leadership from seniors Pa Sad Tit and Mu Ku Shi modeled the desired commitment and unselfish attitude for younger players to emulate. Shi was an all-conference selection. Tit was honorable mention along with Yunis Mohamed and Emmanuel Molinos Lopez. 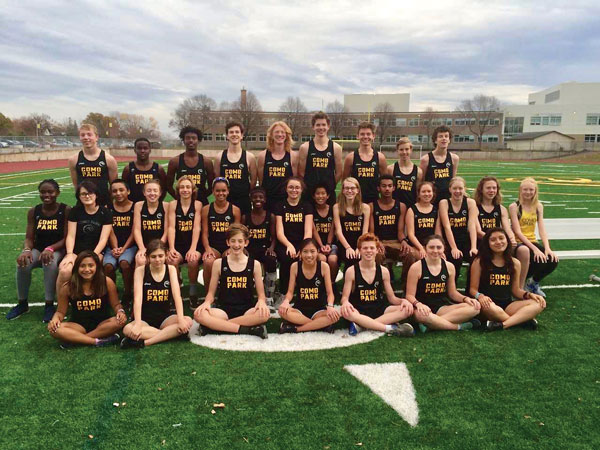 Cross Country — It was another successful season for the boys’ and girls’ teams who both placed third in the St. Paul City Conference. In the five-team Pike Island Invitational, both teams took home the first place, with sophomore Claire Olson crossing the finish line first in the girls’ race. At the conference meet, sophomore Justine Wulff was the top Cougar finisher and earned all-conference status. Olson, Bridget Proper, Saylor Landrum and Molly Clement received all-conference honorable mentions.

Junior Alistair Pattison was a leading runner for the Cougar boys, earning all-conference honors with a strong performance at the city meet. Antero Sivula, Abdulkarim Ogato and Issac Harker were all close behind and qualified for honorable-mention awards.

Volleyball — The Cougars’ volleyball program had 30 players with a varsity, junior varsity, and C-team. Team improvement was evident at every level throughout the season. With just six seniors in the program, a strong nucleus is in place to try to improve upon this season’s overall varsity record of 5-15.

Girls’ Soccer — The Cougars’ non-conference schedule this season was more difficult than in 2017, but the girls responded to the challenge and accumulated an overall record of 11-5-1. New non-conference opponents such as Minnehaha Academy, Tartan and Hastings were tests for the up-and-coming Cougars. Wins against Minnehaha and Tartan were affirming. A loss to Hastings was a learning experience that led to improvement.

Girls’ Tennis — The team had 16 individuals who bonded on and off the court to create a fun extracurricular experience. The varsity’s overall record was 2-7, with wins against Washington and New Life Academy.

The Cougars’ top singles player was senior captain Victoria Hartwich-Cedillo, who earned all-conference. Stella LaCroix-Dalluhn and Abby Karan formed a strong doubles combination and also served as co-captains. LaCroix-Dalluhn received honorable mention. Freshman Eva Larson played No. 2 singles and was Como’s recipient of the Jeanne Arth Sportsmanship Award, which is determined by a vote of the conference coaches.

Girls’ Swimming — For the second consecutive year, Como’s swimmers joined with Johnson High School participants to create a combined team. Practices at Como provided the opportunity for the team to come together and train with common goals of gaining confidence, stamina and speed. The team finished in fourth place in the St. Paul City Conference. Junior Amira Boler earned all-conference honorable mention. Coach Steve Conery was selected as the conference coach of the year.

Volleyball — The Pilots have been a consistent force on the volleyball court over the years and this season was no exception. Murray posted a 13-3 record, placing second in the regular season and third in the conference tournament.

Team leaders and key contributors include Kayla James, Dawn Weins, Grace Hamilton, Ayrion Gordon-Jackson, Janayia Anderson, Ellen Tennison and Selena Paul. The coaches were impressed by the talent and work ethic displayed every day. They are already eagerly awaiting next season when many top players will be returning.

Girls’ Soccer — The Pilots played solid defense and scored many goals on their way to an overall record of 6-2 and a third-place finish in the St. Paul City Conference. The team’s top scorers are eighth-graders Betty Hebble, Pia Banat, Shania Nichols, and sixth-grader Ava Lopez.

The girls’ soccer squad made a lot of progress throughout the season, concluding with a well-played and hard-fought 3-1 loss against the undefeated champs from Highland. No other team had as close a game against Highland than Murray.

Boys’ Soccer — Competition at the top of the St. Paul City Conference was intense with the Pilots right in the mix for a title. In the end, an overall record of 8-2 was good for a third-place tie.

The blending of offensive firepower and tenacious defending led to 39 goals scored and only 8 allowed. Each of the two losses were by narrow 1-0 margins, to Humboldt and Battle Creek. High participation and an abundance of talent bode well for the future.

Flag Football — After two consecutive city titles in 2016 and 2017, the Pilots found themselves in the middle of the pack this season. The team had a record of 4 wins and 6 losses. The Pilots posted wins over Linwood Monroe, Ramsey, Capitol Hill and Battle Creek. While the results were not what the eighth-grade class had grown accustomed to at Murray, it was an opportunity for the students to grow as individuals and a team.