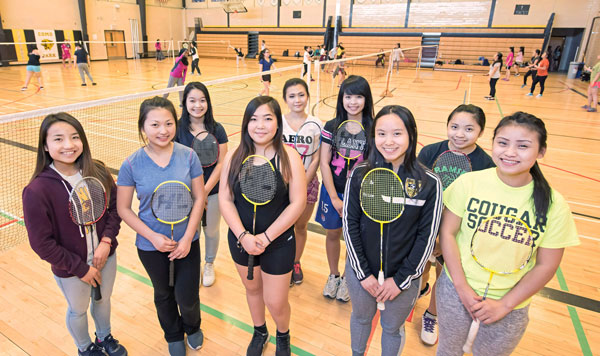 The transition at Como Park Senior High School from winter to spring sports season has occurred. Most athletes are heading outdoors for activities that include track and field, baseball, softball, tennis, golf and ultimate frisbee. There is one spring sport that stays indoors, however, and for the 53 girls that make up the Como badminton program, there’s no place they’d rather be.

That isn’t to say they’re anti-spring. Rather, they appreciate this season because the Como gym becomes the setting for the courts and nets that allow these Cougar athletes to show their skills.

Bugle readers might possibly associate badminton with backyard barbecues. But Minnesota State High School League badminton has a talent pool that would humble any recreational player.

I can testify to that. Overestimating that my own occasional backyard birdie smashing would allow me to compete, I participated in a fun teacher-and-student badminton tournament at Como a few years ago. I recall losing in lopsided fashion and being fatigued far more than my student. Technique matters.

Como physical education teacher Michelle Diaz is the coach in charge who has been teaching technique to the talented athletes for six years. This is her first year as head coach. She is assisted by Pasee Yang, a 2005 Como graduate, who has returned to help the program.

Diaz appreciates her team’s eager attitude and acceptance of all players. “The girls will most often develop good friendships throughout the season, and they all want to get better as the season progresses,” Diaz said.

While her girls are excited to play, they realize there isn’t enough space to keep all 53 players moving on the eight available courts. To resolve this situation and improve fitness, the coaches split the group after warming up together.

While the varsity and junior varsity teams work on their hitting techniques in the gym, the C squad participates in a T25 cardiovascular workout in the wrestling room. The groups switch places after 30 minutes. It’s a creative solution to keep the athletes engaged, maximize space and increase endurance.

Como’s competition in the city is challenging. Other St. Paul schools also have huge numbers, which is a happy problem for coaches to have. There’s energy in numbers and talent to draw from when putting together competitive lineups.

There are currently 24 badminton teams in the state. The best ones are in the St. Paul City Conference. To provide evidence, simply look at history.

Johnson High School has won five of the last six state championships in badminton. Coach Mark Fischbach and his team were recently featured in a KARE 11 story for their powerhouse program.

To win last year’s state crown, Johnson had to beat Washington, a friendly St. Paul rival, in the state championship match. Washington coach Marcus Lane and his Eagles were second place in the city to Johnson last season, and getting to the state final only to see Johnson waiting there is the reality of St. Paul City strength in badminton.

The teams are already meeting in regular season games again, and on April 12, Washington flipped the script and defeated Johnson 4-3. Como opened its season in a close, well-played 5-2 loss to Washington, followed by wins over Highland and Humboldt.

Coach Lane says it’s tough to play Como. “They are young and talented. A lot of their players are friends with our players,” he said. “Como will definitely be a team to be reckoned with in the future if not this year.”

The St. Paul City teams will play two rounds of matches to determine the conference championship, and it certainly appears that there will be a fun intensity to the high school badminton season.

Coach Diaz and the Como girls are working hard and having fun in their indoor environment. Anyone curious to see some high quality badminton with skill, strategy and technique, you don’t have to go too far. St. Paul high school gyms have the best badminton games in town—and the state.