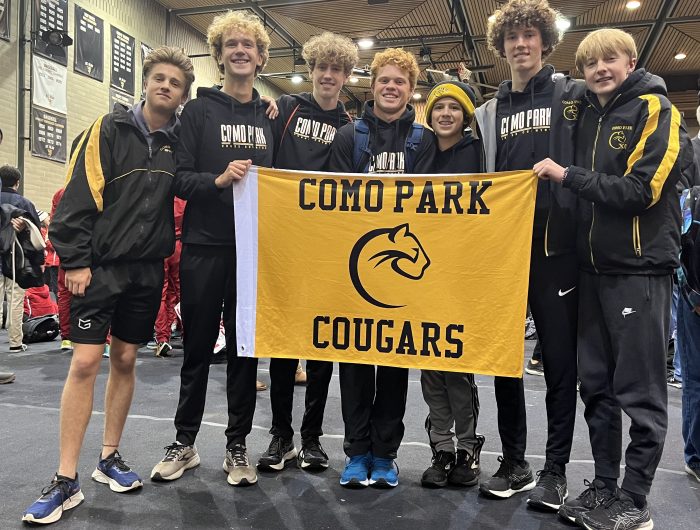 With a dominating performance at the Section 4AA Meet at the end of October, the Cougar cross country boys clinched their second consecutive section championship.

That victory qualified Como for their second consecutive State AA Meet, held on Nov. 6 at St. Olaf College where the team finished in 12th place overall — up two spots from 2021.

The first Cougar crossing the finish line at state was senior Charlie Power-Theisen with a time of 15:43 on the 5K course. This was Power-
Theisen’s third state meet, and he said it was by far his most fun.

As a sophomore he qualified as an individual but struggled on the state course. As a junior, he had another physically challenging day that left him discouraged.

“Last year at state, it was demoralizing,” Power-Theisen explained. “I worked so hard that year and was expecting a good state race. But to fall flat on my face and get passed by a lot of people in the home stretch was really hard.”

In Charlie’s senior year state meet, everything clicked. He was able to run the race according to his plan and cross the finish line with a smile, exclaiming “finally!”

“State was the only thing I was thinking about all year. To come through there was the most important,” Power-Theisen said.

He came through with flying colors, placing 6th out of 160 runners. Decorated with a state medal and being honored on the podium as an all-state runner, it was a rewarding conclusion to Power-Theisen’s high school cross country experience.

Como junior Mason Aarness also earned all-state honors, finishing in 22nd place with a time of 16:30. Rounding out the top five at state for Como and contributing to the team’s score were senior Liam Schwie, junior Garrett Seppanen and senior Sig Isaacson who all finished in the 17-minute range.

Remarkably, Como’s depth and fitness were so strong at the Section 4AA Meet that the Cougars would have won the championship even if Power-Theisen hadn’t run! The fact that he was the section’s individual champion just added to the huge margin of victory over Totino-Grace, Mahtomedi and eight other opponents.

While winning is fun, the senior leaders maintain that their expectations have been consistent through the years — train to improve and be your best.

“Our team kept building each other up,” said Isaacson, a four-year varsity runner who ran JV meets while in middle school. “It just got to a point where we had enough talent and hard work on the team to be two-time section champions.

Schwie joined cross country as a junior. He was drawn to the camaraderie and culture of the program.

“We have fun and do a lot of bonding as we run, and also at events and dinners. But what sets us apart is we’re a high-mileage endurance building team, starting that in the summer and through the season,” Schwie said.

Organizing all the workouts while differentiating for 19 boys and three training groups is the responsibility of head coach Tim Kersey. His team’s success resulted in Boys Coach of the Year awards for both the St. Paul City Conference and Section 4AA.

“This is a really fun group to be around,” Kersey said. “They are great communicators and mobile and willing to go to fun places to enjoy the outdoors and run together. It’s a tight knit group who have been together since elementary and middle school, making their success that much more special.”

When asked about specific varsity contributors, he speaks glowingly about everyone.

“Arthur making varsity as an eighth grader promises a bright future. Davy’s a terrific kid and hard worker who showed significant improvement. Garrett trained hard over the summer and had a breakout season placing 5th at conference.”

Mason’s a fun teammate who had clutch races finishing 2nd at conference, 3rd in sections, plus earning all-state.”

And then there’s Kersey’s senior leaders.

“Liam took on leadership as a captain and was a huge part of our section titles. Sig’s a mature and dependable captain, ranked 2nd in his class academically, always helping younger kids in our program.”

“He could not have done anything more for our team and school,” Kersey said. “He leads everywhere he goes.”

Eric Erickson is a teacher and longtime coach of school and youth sports.