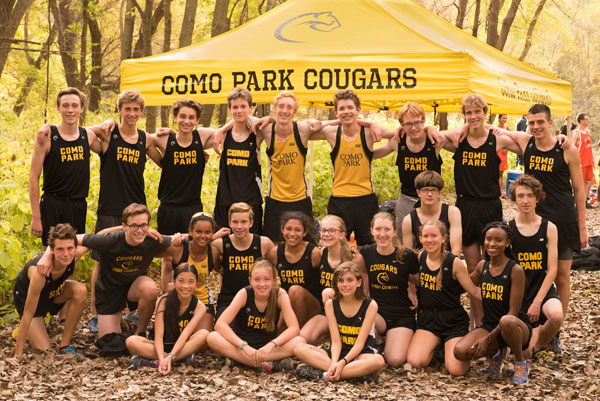 Members of the Como Park Cross Country program celebrated victories for the boys’ and girls’ varsity teams at the Pike Island Invitational on Oct. 11. Photo by Carl Stover

Como Park’s cross country program is a collection of 30 students with a wide range of ability and experience: from novice runners to seasoned seniors who have won elite events.

The differences in time from Como runners can span a dozen minutes for the same 5K course. Como has an extremely young team on the girls’ side, with several participants still in middle school and just one senior.

On the boys’ side there are returning lettermen, including a well-known high school cross country star, Innocent Murwanashyaka, who has received attention from media and major universities while winning championships and placing in the state’s top finishers.

How does an accomplished senior earning his way to a Division I college scholarship get along with inexperienced runners several years younger? And how do beginners feel about training with the fastest kid in St. Paul, possibly the state?

Talk to any team member and you’ll find out that the admiration and support goes both ways.

Innocent is extremely encouraging, according to sophomore Bridget Proper. “He’s always cheering us on and is really supportive,” she said. “He’s at a level where he knows what he’s doing so much that we really trust his words. You feel a lot of pride to be on a team with such a great runner.”

As for the team’s competitive standing, it’s solid. The girls have proven to be the consistent third-place team out of seven in the St. Paul City Conference. The boys are in the same position. The Cougars won the Pike Island Invitational on Oct. 11 in both gender divisions, beating out St. Paul teams from Johnson, Washington, Harding and Humboldt.

Managing tendinitis, Innocent was told to take a break on the day of the Pike Island. He reluctantly agreed to follow his coach’s advice and not even travel to the event to ensure rest. Innocent is well-known and respected, so competitors were inquiring as to his whereabouts. For the team to win the meet without its star shows the depth that the varsity program is developing.

Cougar sophomore Antero Sivula was the top individual at Pike Island with a winning time of 18:22. Sophomore Isaac Harker was the second Cougar across the line and third overall. Junior co-captain Eli Pattison was next and fourth overall. Sophomores Frank McGuire and Jared Czech rounded out Como’s scoring (a team’s top five finishers are used for the varsity scores in meets, with separate categories for boys and girls).

Senior co-captain Florence Uwajenza (Innocent’s sister) was present supporting the team but did not run as she also was nursing a nagging injury. She hoped to be healthy for the St. Paul City meet on Oct. 18 to defend her conference title from last year.

The 2015 St. Paul City title is also on Innocent’s resume. Additionally, he has a Section 4AA medal and an eighth-place finish in state last season. Combine that with his recent repeat win of the prestigious Roy Griak Invitational where he bested 490 other runners in the Maroon Division at the University of Minnesota golf course and people notice.

Teammates and coaches admire how Innocent handles the attention with grace. In fact, he has fun with it. “I have made many friends with runners from other schools,” he says, “but I’m motivated. I like to show people what I’m capable of.”

Teammate Antero Sivula says that Innocent has an impact on the entire program: “He helps all the new runners. He talks to everybody on the team and is a great captain.”

Junior Dominic Wolters noted how Innocent encourages interaction among all teammates. In turn, Innocent thrives on the positive support he has helped to create.

Describing a race, Wolters says, “You’ll be cheering for Innocent and you’ll see him go past and he’s just smiling from ear to ear as you’re cheering for him. He’ll respond to what the crowd is doing. It’s awesome.”

Coach Tim Kersey has carefully constructed activities over the years to create the camaraderie that exists in the Como cross country program. He’s also been blessed that his best runner is an unselfish, charismatic leader. Combine that with highly intelligent, respectful, hard-working kids seeking positivity, and you have the chemistry needed to play the “Cougar Games.”

Friday “Cougar Games” sessions involve mixed-gender, mixed-age “black” and “gold” teams that remain constant through the season. The friendly rivalry and spirit grow through games of capture the flag, kickball and other traditional playground activities. The prize is bragging rights. The result is that it brings the team together.

Several other traditions such as the team’s pasta dinners, Saturday morning runs followed by breakfasts produced by parents and movie nights all enhance the team morale and foster friendships.

Beyond bonding, Kersey says one of cross country’s other main attractions is that all members of the team get to compete. Everyone runs, even if their time doesn’t contribute to the team’s score.

Scoring for the team’s results and trying to win against other schools is just one aspect of the experience. Motivation and competition are present for every runner seeking to improve their own time and beat their personal record.

In that quest, it’s common for the Como runners to encourage the first finisher and the last. So seeing one of the state’s top 10 male runners circle back to the course after winning a race to cheer on the Cougars’ youngest girls is the norm.

With a support network so strong, the Minnesota State High School League Meet on Nov. 5 at St. Olaf College is likely to have an enthusiastic group of Como student athletes in attendance. Realistically, qualifying times indicate just one Como Cougar will be running at state, but the entire team has visions of lining the course.

“I think for all the support Innocent has given the rest of the team, and all the pushing that’s he’s done for us we should really be there for him,” Wolters says.

Innocent will feed off the energy, grinning from ear to ear and race for a personal best while proudly representing the Como black and gold.