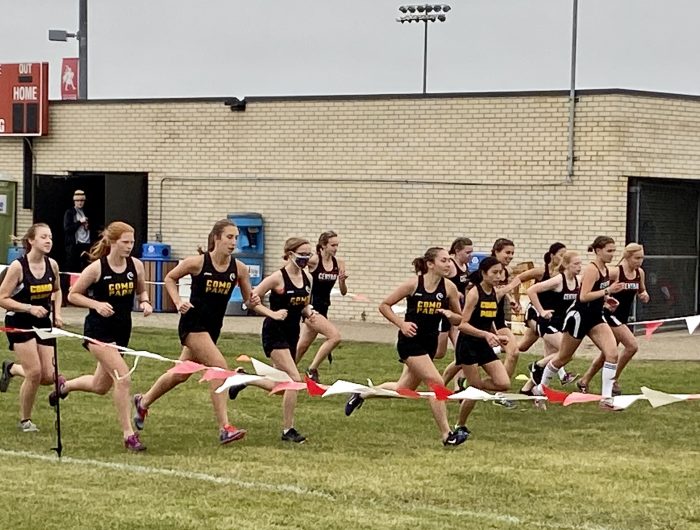 Competitive racers and casual runners share a knowledge of the acronym. The pursuit of a PR is one stimulating element to help persevere through difficult training. Or in the case of the Como High School Cougars cross country team, it’s a motivating force to help navigate a season amid the COVID-19 pandemic.

Without traditional races such as the Roy Griak Invitational or the Section 4AA meet serving as benchmarks, and without large races among many teams, this year has a different feel.

But to run and represent school, outside with friends, in a supportive environment and with a goal of setting a personal record? They’ll take it!

As usual, the Cougars have decent numbers out for cross country with 35 committed runners. There are more boys than girls, but it’s one cohesive program that trains and bonds together.

The competitive meets are less frequent because of COVID-19. They’re also smaller, with no more than 25 runners on a course at one time. Many venues, including parks, aren’t willing to host even those smaller events, which has led to more races being held on school facilities.

Coaches have been creative, setting up new courses and formats that haven’t been used before. One such event was at Highland Park High School where coaches made a two-mile course for the St. Paul City Conference Preview.

In that event on a chilly Friday afternoon, there were staggered start times with varsity runners from two schools going out together. The format was repeated for the other gender, and then also for all junior varsity participants.

Finishing times were collected during nearly three hours of races, and then tabulated to determine the order of team and individual results.

The Cougars finished third out of seven teams in both the boys and girls varsity divisions. That’s been a consistent result for the Cougars for many years, due largely to Como’s reliable cadre of hardworking runners.

As for individual results, sopho­more Charlie Power-Theisen is making some waves, setting a PR for a 2-mile run with a time of 10:34—and taking first place overall in the conference preview.

Power-Theisen also took first place in the team’s first standard 5K race versus Central High School. An all-conference runner last year as a freshman, his results this year are due to increased strength and disciplined summer workouts.

The top training group for the boys features eight runners who are capable of earning varsity points (which are distributed to the first six finishers on a team). Close behind Power-Theisen is senior Shakur Bati, then a group including senior captain Mohamed Aboushanab, junior captains Soren Sackreiter and Dylan Aarness, junior Owen Finlay, sophomore Sig Isaacson and freshman Mason Aarness.

The girls varsity lineup is loaded with experience. Senior captain Justine Wulff is leading the pack and placed second overall in the dual meet versus Central. She was also a top-tier finisher in the conference preview with a 2-mile time of 13:41. With an all-conference award last season, she’s hoping to repeat that performance and set a new PR.

Coach Tim Kersey is in his eighth year of guiding the Cougars. He appreciates the team’s commitment, evident in the voluntary summer trainings that were well attended. And he’s grateful that even with the COVID pandemic, cross country is having a season.

“Everything is a little bit different, (but) nothing is completely different,” Kersey said. “We still have meets. We still have an opportunity to compete. But it’s just with a smaller group of kids in a race. Distancing in warm-ups, different heats in the meets, kids wearing masks when they’re not running, these are adjustments we can do.”

Como’s captains have been willing to make the accommodations and comply with protocols in order to keep the season alive and prevent the spread of the virus.

“Team bonding has been definitely different than previous years but we’ve been trying some new things,” Anderson-Loupe said.

“We did a bonfire one night,” Sackreiter said. “And we’re going to work on bringing the pasta dinners to a park instead of all going into people’s houses.”

“We’ve also done some of our traditional breakfast runs on Saturdays,” Aboushanab said.

Anderson-Loupe added that in those fun runs, as well as practice, it’s natural to end up shoulder to shoulder with a talkative teammate, which requires intervening yells of “spread out!”

There are many laughs at a Como cross county event, along with a determination to reach that peak performance.

“Coach is really committed to helping each individual,” Olson said. “For every workout, he gives each of us a goal he wants us to make.”

Kersey’s thorough planning and strategic goal setting challenge every Cougar runner to reach their best. Not just for a PR in cross country. It’s building a foundation for planning the necessary steps to try and achieve any short-term or long-term goal.

The physical activity, social interactions and the unofficial support network that are Como cross country combine to make it a positive influence in each participant’s life, especially given the tumultuous times of 2020.

After a long training run, as the six Como captains stood in a socially distanced circle, Wulff said, “This is good for our mental health.” Every head nodded in enthusiastic agreement.