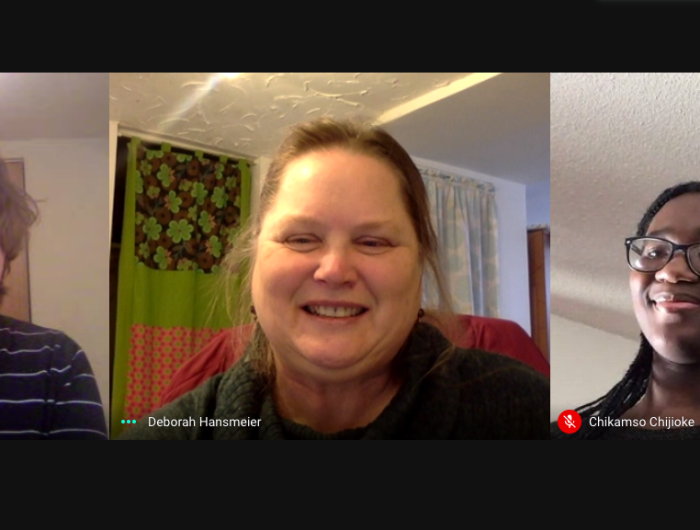 They’ve made steady progress through high school, from participating in the novice division as freshmen, to junior varsity as sophomores, before succeeding at the varsity level this year.

Debate at Como Park is organized by veteran teacher Deb Hansmeier. She is assisted by partners in the Urban Debate League, who provide additional coaching staff and resources. The community coach working with Como was Josh Lamet, a University of Minnesota student with an interest in policy debate.

As they extensively researched this year’s topic, the Como duo built their cases and produced compelling arguments on both sides of the debate topic. This season’s resolution was that “The United States federal government should enact substantial criminal justice reform in the United States in one or more of the following: forensic science, policing, sentencing.”

“We constructed affirmative arguments advocating for ending the death penalty, abolishing ICE (Immigration and Customs Enforcement) and educating people about jury nullification,” Skinner said of the competitions, which were all held virtually.

“We always thought about what the other side could say, and how we could defend against it or use it to our advantage,” Chijioke added.

Coach Hansmeier explained how prepared and adaptable debaters must be to succeed. “They don’t know what side they’ll have to argue until right before the debate,” she said. “Then they present evidence and have to argue why their side is a better choice for the judge.”

The top two teams at each section tournament qualify for state. Chijioke and Skinner secured second place after two days of competition and were rightfully proud. At state, they won two of five debates against the premier competition across Minnesota.

But the trophies aren’t why they compete. Nor are they the highest point of pride.

“I’m proud anytime we have a good round,” Chikamso said. “We don’t even have to win. If I felt I did a good job I was proud. My baseline for an accomplishment was feeling that I did my best, did not give up and used my skills and knowledge in an efficient way.”

Skinner expressed similar sentiments. But most of all, he’s grateful for the collective experience of debate with a dedicated group of Como peers.

“I am most proud of how the debate team has grown this year,” Skinner explained. “We expected that the COVID-19 pandemic would lower participation, but instead our numbers have grown. Each of our teams have performed consistently well at all levels of debate.”

Two years ago, Chijioke and Skinner debated at the novice level. For those willing to put in the time and practice, their progress over the years shows there’s clearly a path for growth at Como in the team’s supportive and collaborative environment.

“Debate can be a home for anyone seeking education, competition and/or community,” Skinner said. “Its inclusivity and opportunity is unparalleled.”

The Cougars defeated the defending city champions from Highland Park/St. Paul Academy by a score of 96-80 in early February. Como’s win against the city’s perennial power hadn’t happened since 1996.

When the Cougars wrapped up the landmark victory, they were swimming in their own pool while their opponent swam across town at Highland. Virtual meets are another significant change from the swimming status quo this season.

After all the uncertainty surrounding the season due to the pandemic, competing anywhere in any format has been a blessing.

“I am very grateful that we are even having a season,” Napierala said. “I was worried we wouldn’t be able to get the record times we always wanted, and that it would be a boring winter.”

With a signature win and personal bests being posted, there’s energy in the Como pool fueled by Napierala, Warnberg-Lemm and other speedy swimmers including junior Soren Sackreiter, sophomore Sig Isaacson, and freshman Kai Sackreiter.

Fans aren’t allowed, but parents Andy and Lisa Sackreiter have stepped up to stream the meets live on YouTube. Cheering Como swimmers from home was never the plan, but as COVID-19 extends into 2021, technology is keeping Cougar supporters connected.