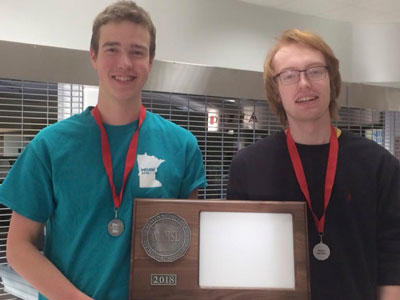 Como Park seniors Stephen Boler (left) and Jackson Kerr placed second in the Section 4 Debate Tournament and, for the second consecutive year, qualified for the MSHSL State Debate Tournament at the University of Minnesota. Photo by coach Deb Hansmeier

Stephen Boler stood at the podium and rapidly rattled off reasons to support his argument. Jackson Kerr scoured research notes on his laptop in preparation for cross-examination.

On the other side of the room, their opponents in the state debate tournament prepared their questions. A judge sat in the back, evaluating the evidence presented and the persuasiveness of the arguments.

Affirmative and negative positions for a resolution concerning increased federal funding and regulation for education in the United States were claimed and supported.

This was the scene in a University of Minnesota classroom on a frigid Friday evening in January. Boler and Kerr were in their fourth 90-minute debate of the day. They were tired but in their element.

The two Como seniors had been here before. The debating duo qualified for state together as juniors in 2017 and repeated the scenario in 2018 by taking second place in the Policy Division of the Section 4 tourney on Jan. 6. (The top five teams from each of four sections qualify for the state meet.)

The Minnesota State High School League (MSHSL) has been sponsoring debate since 1902. Yes, you read that correctly. Long before baseball, hockey or soccer state tournaments, there was debate. There have been 117 MSHSL State Debate Tournaments.

Participation varies by school. Como had 10 students on the debate team this season who went above and beyond the reading and writing required by their coursework.

Not every school offers debate. Not every school has kids with the interest, initiative and energy to spend multiple, in some cases, countless hours immersed in public policy research.

“I spend as much or more time preparing outside of school practices,” Boler said. He and Kerr both access resources for their arguments independently when they can. All the Como debaters gather for a couple of two-hour practices a week after school.

The team’s administration and practice sessions are organized by coach Deb Hansmeier. A special education teacher at Como since 2000, Hansmeier added debate to her responsibilities two years ago.

Como alum Ian Johnson, who is attending the University of Minnesota and has participated in debate there, has been assisting as a debate coach at Como since his graduation in 2013. Johnson’s coaching role is critical because he’s the debating guru and tactical expert.

“He [Johnson] has a lot of resources for research and has a lot of experience,” Boler said. “He’s taught us a lot of different strategies and techniques and different type of arguments.”

Como debaters are grateful for the leadership they have. The presence of Hansmeier teaching in the building helps. “Ms. Hansmeier provides a lot of stability and organization, Kerr said, adding, “She’s done a great job bringing new people into the program.”

Hansmeier encourages newcomers to join by emphasizing that there is a Novice Division for beginners. There is also a Junior Varsity Division. (State is only for the varsity level.) With self-selection, intimidation is lessened, support is provided appropriately, and students can develop confidence.

Beyond Boler and Kerr, Como has two other experienced debaters who competed at the varsity level this season. Juniors Peter Schik and Henry Hansen earned honorable mention in Section 4 by finishing in seventh place. They finished fourth a year ago as sophomores and qualified for state. Their goal will be to get back there next year as seniors.

“I am most impressed by their enthusiasm for the debates, and their interest in learning about the topics, and especially how they are able to take both sides of an issue and use their evidence to back that side up,” Hansmeier said.

“In the debate rounds they don’t know until right before they start if they are speaking for the affirmative or the negative, and they have to be ready to find evidence for the negative side of whatever argument they are given. This takes a lot of hard work and they have to really be able to take notes and follow what is going on in the debates. I have been lucky to be able to listen to them all debate and it is truly fascinating.”

Coaches at their best are educators who view their sport or activity as an extension of the classroom. Helping students explore an interest, collaborate, develop skills and reach for personal growth are some of the rewarding reasons for the work. And, as Hansmeier alluded, coaches often learn a lot from and are inspired by the kids they coach. That certainly has been the case with Como Debate.

As for the state tournament, Boler and Kerr battled against the state’s best in the preliminary rounds. While they enjoyed the challenge of tough competition, their one win in the prelims was not enough to advance into the quarterfinals.

Neither expected to win a state debate championship, but as freshmen, neither expected to make it to multiple state tournaments either. The improvement that occurred with time on task was an enjoyable journey. What it’s done to enhance their educational experience at Como and supplement their learning is best described by the experts.

“I’ve learned so much about public policy and philosophy that most people don’t comprehend or glean from seeing debate on the surface,” Kerr said. “But in truth, that’s at the core of it—just further educating ourselves on premises of government and philosophy.”

“Debate has been a great way to make us think critically and look at issues from multiple angles,” Boler said.