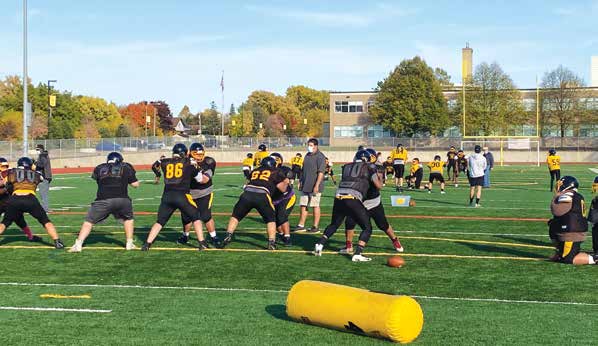 Plans are fluid during a pandemic.

Initially moved to the spring, the Minnesota State High School League restored football and volleyball to a fall season with a vote in late September.

Protocols and precautions already in place for other fall sports meant the football schedule in St. Paul returned to a traditional conference format. The Cougars plan to have five regular season games versus city rivals.

Coach Kirby Scull is excited for the 45 players in the program and the opportunity they have to play. With 14 seniors and several returning starters on both sides of the ball, there’s been positive energy on the Como turf.

“The transition was smooth,” Scull said. “We were two weeks into fall practice (sanctioned by the initial MSHSL decision) when they moved football back to the fall, so 90 percent of the team was connected to what we were doing.

“The biggest issue was during the fall practice sessions we were spending very little time on special teams and no time on hitting drills. So we had to change our intensity level and alter practice priorities to get ready to play in a short period of time.”

Realizing that all activities are subject to change, there is gratitude for every day that football creates connections for kids.

“It seems like the players are excited to have a chance to be around friends and compete,” Scull said. “The energy level has been good, and players are working hard to get better each day.”

Wolf is the official varsity coach, Hausman handles the junior varsity and they share duties for the c-team( typically a squad made up of freshmen and sophomore students). It’s truly a collaborative effort, and one necessitated by the quick shift back to a fall season.

The varsity team is coming off a successful 2019 season with an 8-4 conference record. With several key players returning, the Cougars are looking forward to competing with the best squads in the city.

Senior captain Hannah Hausman is an accomplished outside hitter. She has compiled impressive offensive statistics during her Como career, but more importantly, she’s been a mentor to many.

“Hannah has been a key player on and off the court,” coach Hausman said. (And yes, for the record they are related. Hannah is younger sister to coach.)

“Hannah has shown great leadership to all the girls on all our teams, not to mention her exceptional skill on the court.”

Senior Nag Poe is an impactful libero (defensive specialist.) She covers the floor well and inspires teammates with digs that extend points and give hitters a chance to score.

“Nag Poe is a very talented consistent back row player that we can depend on,” Coach Hausman said.

Junior Pa Nra Lee is the team’s main setter. It’s a crucial role on the court, and one that Hausman says Lee plays with positivity and energy that is contagious.

Junior Jada James is a “powerhouse hitter” on the right side of the court. Her coaches say she comes through in the clutch.

Tess Freberg, an outside hitter, has stepped up to be a captain this year as a junior.

The mixture of veteran leadership and promising young talent that the Cougars possess could be an effective formula for a successful season, while also maintaining a strong foundation for the future.

Beyond that healthy blend on the varsity team, there’s a sense of sisterhood among the three hardworking teams within the program that support each other in practice and during each other’s games.

With no spectators allowed during this unique season, the spirited cheering for each other will serve the Cougars well.