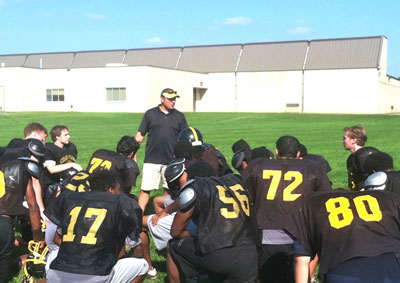 Como football team ‘gets it done’

Coach Kirby Scull addresses his football players at the end of practice on Sept. 3. Scull has been serving as Como’s head football coach for the past 12 years.

It’s 4:30 on a Tuesday afternoon. Students have left their classrooms, but teaching and learning continues on Como Park Senior High School’s practice field west of the building. The varsity football team is gathered around Coach Kirby Scull. His players have made progress today and the coach’s energetic encouragement lets them know it.

Scull has been teaching math and coaching football since 1992. For the past 12 seasons, Scull has been leading the Cougars, serving as head coach and running a program for 45 players in grades 9-12 with the help of his assistants.

That number is half of what it once was. In 2006 and 2007, the Como Football program had a roster of around 90 players. That pinnacle of participation led to an undefeated 2007 season in the St. Paul City and a conference championship. A shared conference title was added in 2009.

While football all over the state and nation is experiencing declining participation due to a multitude of reasons, including fear of concussions and changing demographics, some city schools have seen the impact dramatically. Count Como in that category.

Scull admits there is a challenge with lower numbers and that this year’s team is especially inexperienced with just 14 players returning from last year’s roster.

So, yes, there have been some challenges and the season began with three straight losses. And yes, Como is the only school playing football in the city that doesn’t have a stadium or turf field. And yes, Como has never played a true home game. Even Homecoming requires a bus ride down Lexington Avenue to Griffin Stadium next to Central High School.

Given all that, Scull continues to serve.

“The goals are always the same,” says Scull, “to help young men become better players, students and people, and to make playing football at Como a great experience for each player.”

Athletic director Mike Searles has a deep respect for Scull’s work and determination. “He has maintained a positive outlook,” says Searles. “Coach Scull’s team competes hard each day. His student athletes are dedicated and hard-working—very much a reflection of their coach.”

Scull doesn’t do it alone. In fact, a program motto that has been in place for years is TGID—Together Get It Done. Veteran offensive and defensive line coach Adam Kunz is part of the staff that includes official coaching positions and volunteer assistants.

Scull gives tremendous credit to all his colleagues, both from the present and those that have served the program in the past. But coordinating all the moving parts is the job of the head coach, and Kunz retells a story that demonstrates Scull’s adeptness.

In order to create a memorable event for the team, Scull planned a picnic at Como Park for the entire team and coaches. They grilled hot dogs, ate icy pops, played yard games and even tried mini-golf at the Putt’er There course.

“Coach made sure guys got there, shuttling back and forth. It was a great time that coach planned and executed for all of us,” said Kunz.

Notice the story has nothing to do with the x’s and o’s of football. While ultimately the results for the record books will be played out on the field, it’s that overall quality experience for each player that successful coaches like Scull look to create.

The details that go into guiding each player to be their best are difficult to convey. Many veteran coaches and teachers share the sentiment, “You can’t make it up!” The issues, challenges and obstacles are unique for each kid.

Como football is a safe haven and family for many types of kids. The sense of belonging can be a guiding force in the lives of young men. It frequently provides a pathway to college and preparation for the workforce.

Scull and his staff are proud of the success former players have achieved. Employment, military service, college football, college degrees and families are examples of accomplishments that are rewarding to both the players who grew up and the coaches who helped guide them.

Additionally, there is much to be proud of in the present. The players on the 2015 team are improving every day and play hard, with their best effort, regardless of the score or their record.

Through the years, Scull has seen wins fluctuate, participation decrease and resources go unimproved. However, there is a constant: It’s the service to young men trying to improve their lives through the game of football and how it gets done at Como—together.