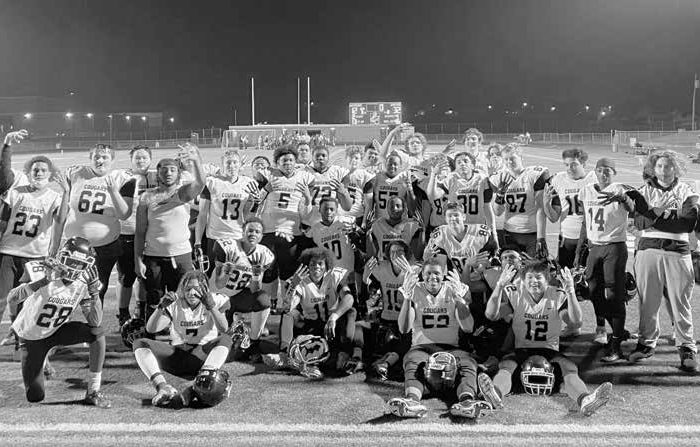 For the first time since 2009, the Como Park Cougars football team earned a championship, finishing 4-0 in St. Paul City Conference.

After an ever-evolving schedule eventually led to high school football kicking off a shortened season in mid-October, the Cougars took full advantage of the opportunity to play.

With a defense that only allowed a touchdown per game on average, Como rattled off four wins in the four weeks of city competition before COVID protocols shut things down in St. Paul.

For Cougar football players, one month of games was enough to make memories that will last a lifetime. Considering Como finished the 2019 season at 1-8 with several lopsided losses, the 2020 campaign was especially sweet.

Head Coach Kirby Scull has guided Como football for 17 years. He has led teams to titles in two other seasons (2007 and 2009), but hadn’t ever experienced such a swing in results from one year to the next.

Scull credited the turnaround to a strong senior class.

“Not only did we have 14 seniors, but they were 14 very committed seniors,” Scull said. “Seven of them played football at Como Park for all four years. They really had a chance to develop and grow into being players who could help us in a lot of ways.”

Adeagbo, Sears, Hudson and Lucy, who started on both sides of the ball, led a stingy defense that only allowed an average of one touchdown per game. Adeagbo, a defensive end, led a fierce pass rush and finished in the state’s top 10 for quarterback sacks.

The Cougars’ defensive unit was consistent all year. They started strong in a 16-8 season-opening win over Highland and peaked the next week in a pivotal game versus Johnson. The Cougars didn’t even give up a first down in the second half against the favored Governors.

The score remained tied 6-6 as the fourth quarter concluded. After another defensive stand in overtime, Stone Frasl scored Como’s game winning touchdown on a short run to secure the exhilarating 12-6 final result.

Although no fans were in attendance due to COVID regulations, a noisy, joyful celebration ensued on the field. Sully Lucy, who had two interceptions in the game, stated that the feeling after beating Johnson was a highlight moment that he will never forget.

“It was amazing,” Lucy said. “We worked really hard to get ready for this year and our hard work showed during the game. Hard work all around. Defense was dominant led by Jahrese Adeagboand Maurice Gant.”

After Johnson, the Cougars defense continued to roll while the team’s offensive productivity soared behind the strong quarterback play from junior Jude Breen. A 36-0 shutout of Humboldt in week three put Como in position to clinch the championship if they could beat Harding on the Knights’ home turf. A convincing 32-12 Cougar win at Harding sealed the deal.

A couple positive COVID tests among the city teams caused the cancelation of the fifth and final week of games. Como could not be caught in the standings at that point, but there was disappointment that a game against Central could not be played.

Much like the rest of 2020, high school football was different. Some wondered if the season should have happened at all.

For Coach Scull and the Como Park Cougars, there was no doubt. Only gratitude.

“It seems like we’re living in a world where everything you get to do that’s normal is just a little bit sweeter and feels like a huge blessing,” Scull said.

For Scull, seeing his student athletes not only get the chance to play but come together and work hard to achieve a championship season was fun and a great blessing. It’s also a source of school pride that Como emerged as City champions.

Coach Scull explained what it may mean for his players going forward.

“I think with a team that grows so much together, you make some friendships that don’t go away,” he said. “They’re just kind of always there. I would think our team is going to have fond memories of 2020.”