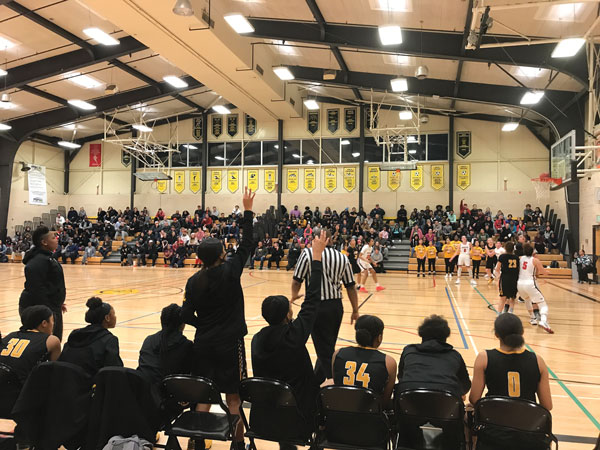 In fact, as of our press publication, the Cougars have not lost a conference game since 2015.

In addition to their 40-game conference winning streak, the Cougars have won the Twin Cities Title Game against the Minneapolis champs four consecutive times, appeared in the 2016 State Tournament, and sent several players on to study and play ball in college including four who graduated from last year’s team.

This year’s Cougars are noticeably younger.  Perhaps shockingly younger!  The starting line-up includes a sophomore, three freshmen, and an eight-grader from Murray.  Will there be a drop-off this season?  Early results indicate no.  Not at all.

As the Bugle went to press, the team was undefeated with a record of 5-0 and victories over highly-ranked, older opponents including Bloomington Kennedy, Mounds View, Minnehaha Academy, and the defending Class AAA State Champions from Robbinsdale Cooper.

To say these results were expected would be misleading.  While Cougars coach Alexis Gray-Lawson knew she would have talented players this year, she also knew most of them were only 14- years-old.

For Como to stay on top of the city conference, and compete for a section title, coach knows her young kids must learn to win.  So far, so good.

“Obviously we’re young, and we’re not big.  But honestly, I’ve probably been surprised more than anything else,” Gray-Lawson said.  “We’re poised even though we’re a lot younger.  I think we play with a passion for the game.  They have a will to not want to lose, which is a lot like me.”

“This group loves studying the game.  They watch film and ask ‘How do I get better?’ and ‘Why did I do this?’  They want to know how and why we do things.  They want to learn to win.”

Gray-Lawson, or “Coach Lex” to her players, noted it’s hard to keep her players out of the gym once practice is over because they want to keep working on their game.  And coach makes sure her players keep their priorities straight: Before practice every day, the players work on their academics in study hall and check in with academic advisor Kristy Pierce, who examines the daily monitor sheets each player must have signed by every teacher.

Schoolwork is a priority and the team grade-point average of 3.6 after the first quarter of school bears that out. Four team members have G.P.A.s of 4.0 or higher (with weighted grades for advanced classes).

One of those student athletes is Dinnea Riley, a junior who has had all As in high school.  “Academics are really important to me and to our team.  I want to be one of the first in my family to go to college,” she said.

Freshman Kaylnn Asberry said the coaching staff holds them accountable.  “They preach good grades and staying on task.  We’re trying to exceed and do even better than we did last year,” Asberry said.

The team also performs community service.  Last summer, the Cougars spent a few evenings serving meals at homeless shelters and centers, such as the Salvation Army.  They are continuing to do a monthly service event through the season.

For her part, Gray-Lawson is modeling the importance of academics as a coach at Como.  This year, she took a full-time position in education as the bi-cultural liaison for the African-American community and families in the North St. Paul-Maplewood school district.  Her responsibilities are to bring students, families and administration together to meet shared goals.

Gray-Lawson double-majored in legal studies and social welfare at the University of California at Berkeley.  She also played basketball at Cal, graduating in 2010, before a four-year pro career that included the WNBA and leagues in Turkey and Israel.

Given her background, Coach Lex is an impressive, inspiring role model for her student athletes.  She knows what it takes to play at the highest levels and how to prepare for the best competition.  Details matter.  She’s a demanding mentor, at times.  Veteran players and alumni will testify to that.  Now the current team is learning too what it takes to win, and how to maximize their talents.

Beside a will to win and hard work, the 2018-19 Cougars on the court are blessed with speed and athleticism.  Como attempts to take advantage of those gifts by playing fast.  They’re aggressive and push the ball up court before their opponents’ bigger bodies can set up their defense.

“We’re little,” said Kaylnn Asberry.  “A lot of teams are way bigger than us.  We work on boxing out a lot.  We have to work hard to get rebounds and we like to use our athleticism and get steals and fast break points.”

The Cougars are also well balanced.  There is no obvious superstar and a variety of players have been top scorers from game to game.  While the team has a deep rotation, it also uses a consistent starting five.  That unit is includes sophomore Demya Riley, freshmen Kaylnn Asberry, Jada James, and Cloey Dmytruk, and eighth-grader Shania Nichols (who attends Murray.)

Freshmen Shakyla Walker and Ronnie Porter are often two of the first players off the bench.  The team’s juniors are JaShawna Baker, Dinnea Riley, Linda Mitchell, and Kini Po Hart.  Two freshmen who play on the JV, Tenia Childs and Annaya Bonds, also suit up for the varsity.

Put it all together and you’ve got a team that has earned a ranking in the state’s top ten for class AAA.  As the Bugle went to press, the Cougars were ranked sixth.   Nobody saw that coming.  Nobody knows where the journey will go.

Yes – the team would like to get back to the state tournament.  However, this group doesn’t yet know what it takes to get there.  These girls were all in middle school the last time Como made state in 2016.

“I think if we learn how to win, then eventually we’ll get to where we want to go,” Gray-Lawson said.

For the community and the team’s supporters, it’ll be a fun group to watch.  The Cougars have talent and a collective interest in learning to win, attributes that will serve them well on the court this season – and off the court as these young girls navigate their high school years and beyond.