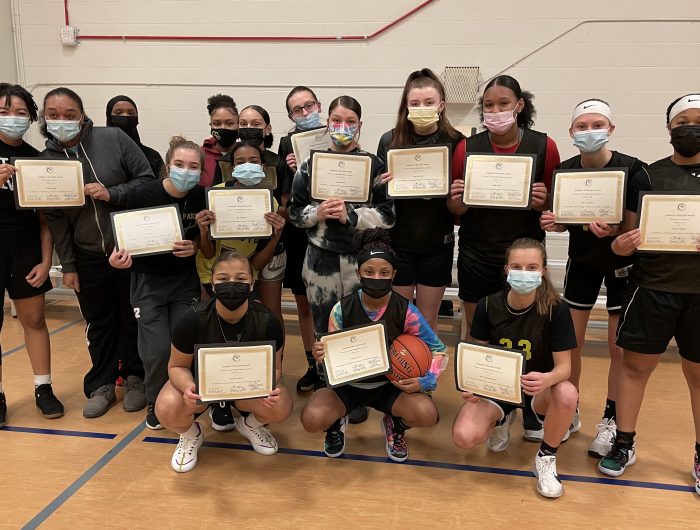 For the Como Park girls basketball team, it’s more than a mantra. It’s a way of life. Academic check-ins with their coach and academic advisor and study sessions fueled by the players are daily routines completed each afternoon before the team takes the court for practice at 6 p.m.

That priority has produced statistics that make the Cougars an inspiring force, on and off the court.

High school sports fans in St. Paul and the basketball community in Minnesota know of the Como girls team’s on-court success: a 72-game conference winning streak stretching back to 2015 and a No. 4 ranking in the 2021 final state polls.

Less publicized but also very important are the players’ academic achievements, which include a 4.1,weighted team grade point average. With most players in the program taking accelerated coursework and earning grades on the A and B honor rolls, the emphasis on “academics first” is laying a foundation for future college success.

Higher education is a goal for every girl in the program. Preparing for college is the standard as set forth by the coaching staff and modeled by alumni.

“We know that colleges aren’t going to just look at our basketball,” Riley said. “They’re going to see our grades and what’s going to really count is what we do off the court.”

Coach Olonda England holds each player accountable for their assignments and grades. Failure to keep up has consequences including extra conditioning and individuals missing games when necessary. With expectations well established and grades so high, those disciplinary actions are rare.

Coach England and Academic Advisor Ms. Kristy Pierce communicate with the team via group chat daily during distance learning, providing reminders and encouragement. The group chat is also fueled by the student athletes who offer help and set up study groups for classes they share.

“We’re always there for each other,” said junior Shakyla Walker. “We lean on each other, support each other and we push each other to do our best in all our work.”

At 4:15 every afternoon, Pierce greets the girls who need in-person academic support. Study hall is quite literal for Como Park girls basketball as they set up tables and chairs to study in the hallway outside the gym before practice.

“Ms. Pierce is always on us. Even though we hate it, we love it because she believes in us,” Riley said. “She knows that if we do bad on something that we can do better, and she pushes us and helps us out a lot.”

The Cougars have a well-earned reputation for tenacious play on the court. They are known for their hustle and work ethic, and those same characteristics transfer to their academic studies. It’s a winning mindset with the student athletes committed to do the little things in order to achieve big goals.

Joining Como’s culture has been inspiring for freshman Alice Wagner-Hemstad who said, “Every­one was so open and welcoming when I came in. Everyone just gives it their all and it’s good to be surrounded by that and I appreciate it.”

The team’s starters have been playing together for years. The fact that new faces have blended in so quickly is a testament to the positive chemistry.

The combination of ages and personalities keeps things fresh and fun.

Junior captain Porter said, “There’s comedy every day. Our coaches are funny. There’s always something that makes us laugh and we can make fun of each other.”

Laughter has been important during the challenging times of the global pandemic. The last year has made learning harder. The Como girls have stayed strong during distance learning, but it hasn’t been easy or without stress.

Basketball has been an opportunity for the physical release of energy, and a support network for the ambitious, forward-looking, talented student athletes who wrapped up their program’s seventh consecutive St. Paul City Conference Championship.

The accomplishments on the court are secondary. Academics come first.

And with the shared values of pursuing excellence on and off the court, the student athletes of Como Park girls’ basketball have become much more than a team.

“We’re sisters,” Walker said. “We’re family. We’re all here for each other as one.”