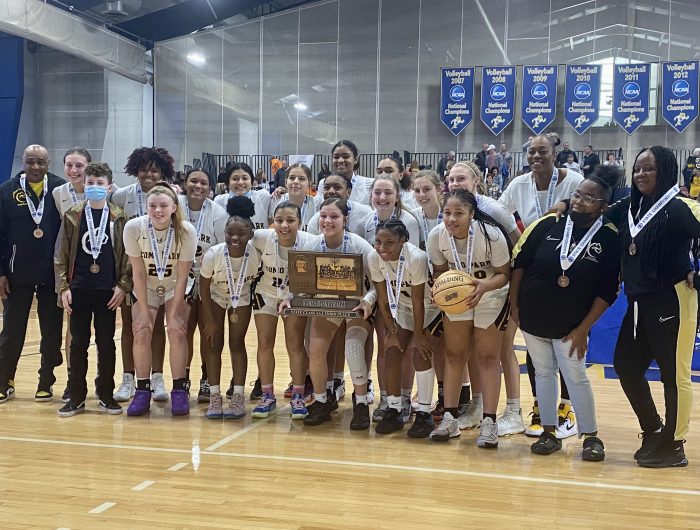 St. Paul City Conference championships for the Como Park High School girls’ basketball team have been the norm since 2015.

The Cougars have won 77 consecutive conference games during their 8-year reign atop the city.

But winning a section championship and qualifying for the state tournament had proven more elusive. The program’s first and only trip to state had been in 2016, when Como’s current senior class was in the sixth grade.

In the years following that lone state appearance, a talented and spirited group of Murray Middle-schoolers began playing varsity basketball for Como with dreams of bringing the Cougars back to state.

In March of their senior year, the class of 2022 made their dreams come true.

The Como girls defeated DeLaSalle 75-72 in the Section 3AAA Championship Game, setting off a joyous celebration on the Cougars’ home floor with family, friends and fans. With championship medals and trophy in hand, knowing their careers would conclude at state, smiles and hugs were countless.

“It was definitely a dream come true,” said senior captain Ronnie Porter, who was selected as the East Metro Player of the Year by the St. Paul Pioneer Press.

Senior center Jada James said that when the final horn sounded, the first thing she did was cry.

“I was going to cry no matter what the outcome was, win or loss,” James said. “All the emotions that had built up to it from the prior years – to get the win and go to state, it was a lot.

“Being able to hug my teammates in that moment and have the fans storm the court, it was definitely something I’ll never forget.”

Porter and James, along with Kaylynn Asberry and Shakyla Walker were the players who began Como basketball as eighth  graders. Along with Cloey Dmytruk who joined the Como varsity as a freshman, and Annaya Bonds and Taylor Fairbanks who later developed into varsity players, this year’s senior class became family and also nurtured the younger players contributing to the program.

The senior class of 2022 grew up together and shared their successes while also enduring frustrations through the pandemic and painful playoff losses.

To reach their goal of state in 2022, Como head coach Olonda England assembled the most challenging non-conference schedule imaginable.

With a dozen games versus ranked teams, including six against top-ten teams from Minnesota’s largest enrollment class (4A schools including Hopkins, Wayzata, Stillwater and Eden Prairie) the Cougars concluded the regular season with an overall record of 19-6.

That rigorous schedule and their success against it earned the Cougars the No. 1 seed in the section tournament, and the No. 2 seed for the Class 3A state tournament.

Como’s state quarterfinal game was on March 16 against Grand Rapids at the University of Minnesota’s Maturi Pavilion. The Cougars won 76-57 to earn the program’s first-ever victory in the state tournament and advance to the semifinals the next day at Williams Arena.

As usual, the Cougars put forth a determined effort against Totino-Grace, but it wasn’t meant to be. Totino defeated Como 86-72 and went on to win the state title by beating top-seeded Becker in the final.

Meanwhile, Como had 48 hours to overcome their disappointment and reset expectations to play in the state’s 3rd place game versus Mankato East at Concordia University.

“They went out and got the job done,” England said.

The Cougars’ convincing 91-69 victory showed the strength of a remarkable team. The class of 2022 went out in style, adding to their legacy, and giving their loyal fans one more special memory.

More important than winning the last game of their high school career, the Class of 2022 shined in the classroom. The team’s weighted grade point average of 4.1 earned the Minnesota State High School League’s Gold Academic Award.

As for college, Fairbanks will attend the University of Minnesota and Bonds is still considering her options.

Como’s five starters will be studying and playing basketball next year: Porter at the University of Wisconsin, Asberry at St. Peter’s in New Jersey, James at Rochester Community and Technical College, Walker at North Iowa Area Community College, and Dmytruk at Waldorf University in Iowa.

“The class of 2022 group is very special and dear to me as they are all true leaders,” England said.

“They grew up so fast but to see their growth and how amazing they are in the community is what any coach or parent for that matter would love.

“These young ladies have made their mark and have shown greatness and I am truly happy for all of them. All are prepared and ready for the next level and I am so proud of them all.”

Eric Erickson is a social studies teacher at Como Park Senior High School and a long-time coach of youth athletics.