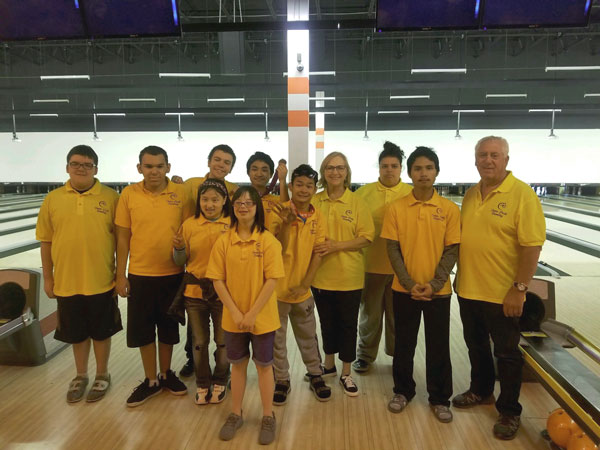 Badminton — For the second consecutive season, the Como Park Cougars varsity badminton team earned the third-place trophy at the Minnesota State Tournament. Like many St. Paul schools, Como’s program was large with more than 50 players participating on three competitive levels.

The varsity squad faced tough teams during every match of the St. Paul City Conference schedule, finishing in a tie for fourth in the seven-team conference. However, the benefit of playing the state’s top teams in conference revealed itself, as the Cougars and their rivals marched through the state brackets. 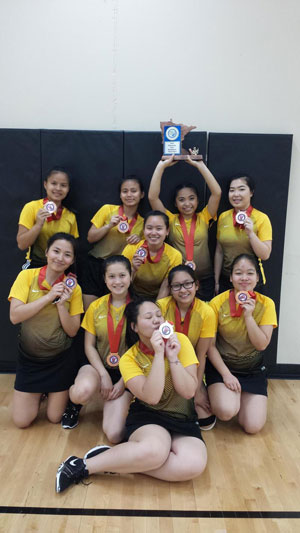 Of the 25 varsity badminton teams in the state, the four teams that advanced to the semi-finals were from St. Paul, including Johnson, Washington, Harding and Como. In the semi-finals, the Cougars lost to Johnson, the eventual state champion, by a score of 6-1. Despite the loss to the four-time defending champions, the Cougars knew they were playing as well as they had all season and bounced back with a 4-3 victory over Harding in the third-place match.

Senior Maria Aye Meh and sophomore Shar Too earned the third-place medals by defeating seniors Yia Yang and Zoua Xiong, who placed fourth. The fact that they were playing against their practice partners and friends so deep in the state tournament showed what a special situation and positive year of badminton it was for the Cougars.

Softball — After two years of agonizingly close losses in the chase for a conference championship, the Cougars came through this year and earned the St. Paul City Conference title with an 11-1 conference record. It was a thrilling and rewarding run for a team that had graduated its star pitcher and came into the 2018 season uncertain about its prospects.

Expectations stayed high, and sophomore Bailey Huepenbecker stepped up to the mound, becoming a reliable pitcher who could throw strikes and maintain composure. Freshman Bella Proper emerged as a reliable catcher, and returning infielders Alexis Barnes, Gigi Gabrielli, Isabelle Hoppe and Adrianna Tarver made defensive plays, along with outfielders Jade Sklar, Bridget Proper and Jessica Koch to keep the Cougars close until their bats came alive.

The team staged several dramatic come-from-behind wins, none larger than the one at home versus Central when Como rallied from seven runs down in the bottom of the final inning to win in walk-off fashion.

Girls’ golf— The Cougars’ golf team had a successful season despite limited time outside and challenging playing conditions. Because the ground was soggy from snow that hung around until May, much of the practice time was spent hitting into nets in Como’s fieldhouse. Two of the more challenging matches, on the hilly Como Golf Course and at Lake Phalen, were played in extreme heat and heavy rains, respectively. The girls persevered, however, and they had fun and improved their scoring as the year progressed.

Girls’ Ultimate Frisbee— The Como “Aurora Ultimate” team had an outstanding season with a mix of returning players, new talent and an All-State player and leader in Ana Caballero.

Aurora blended its strengths into a cohesive unit that implemented nuanced tactics of the game and executed skilled throws and catches. At the state tournament on June 2 and 3, Aurora competed in Division 2 (D2). Aurora’s record was 3-1 in the group stage. In the D2 championship bracket, the team played at a high level, narrowly losing by one point in the semi-finals to Open World Learning and also falling by one point in the third-place game to White Bear Lake.

Senior Ana Caballero once again collected All-Conference and First-Team All-State honors. She was an inspirational player and brought out the best in her teammates. Senior Claudia Patrin and junior Georgia Langer were also selected as All-Conference players.

Track and field— Senior Florance Uwajeneza capped off her high school running career by qualifying for the Minnesota state track meet in the 3200 meters. To do that, she had to run a personal best, and even with her record time of 11:35, she was in a photo finish with four runners. The review that ensued seemed like an eternity before it was determined that Uwajeneza had finished second. The top two finishers qualify for state.

On the boys’ side, senior Lukas Walton repeated as the St. Paul City champion in the 300M hurdles. He also took second place in the 110M hurdles and sixth in the high jump. Walton was a top 10 finisher in the same three events in the Section 4AA meet.

Como’s adapted bowling team succeeded in the annual state tournament on May 18 at Bowlero Brooklyn Park. Photo by Cheryl Jackson

cognitively impaired (CI) students. Como teacher Janeen Hedren and retired teacher Bob Prifrel brought their team to Sunray Lanes on St. Paul’s East Side once a week for five weeks prior to the qualifying event and state tourney.

The bowlers enjoyed the activity and the camaraderie outside of their usual school setting. “When these students are participating, there is great joy and a sense of success that they feel and excitement that they’ve achieved something beyond academics,” said Hedren.

Baseball— In the St. Paul City Conference, Como finished with a record of eight wins and four losses in a tie for third place, challenging for the championship through the last day of the regular season.

The condensed schedule with multiple double-headers in the same week was a challenge to manage because of state-mandated pitch counts and wanting to protect players’ arms from overuse. Nonetheless, the Cougars managed the situation and several players had solid seasons both defensively and offensively that earned recognition.

Boys’ tennis— The Cougars did well in their nonconference matches. They were triumphant over teams such as North St. Paul, Tartan and Simley. The St. Paul City Conference was tougher as Como recorded two wins against four losses. Wins over Humboldt and Washington were convincing with scores of 6-1, and an extremely competitive match versus Central was a 4-3 loss.

Boys’ Ultimate Frisbee— Como Area Ultimate (CAU) put together an unforgettable season. From a dominant victory over Minnetonka in their first-ever game on the new field turf at Como, to the new spectacular spotted-cow uniforms and the state tournament, this spring was special. 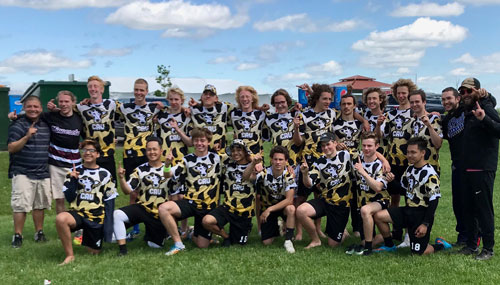 Como Area Ultimate was all smiles in their unique spotted-cow uniforms following their 8-7 victory over Robbinsdale Cooper in the title game of the D2 state tournament. Photo by Tim Chase

For state play, CAU competed in Division 2 (D2), which is the second-most competitive level of the four boys’ divisions. After finishing 11th in the same division last year, the Frisbee boys of Como climbed the ladder all the way to the top, winning the D2 state title.

The road to the championship was filled with challenging opponents in group play. Earning a high seed, CAU advanced through the playoff brackets with a close 8-6 win over St. Louis Park, an impressive 12-7 semifinal result over Cretin, and claimed the title in dramatic fashion with an 8-7 win over Robbinsdale Cooper.

A joyous celebration occurred on the field at Blaine, and plenty of parents and supporters were there to share the proud moment for the Como boys.

Softball— The Murray softball team finished in a tie for the conference championship with Capitol Hill. The eighth-grade class took a leap to the top. After finishing in third place as seventh-graders, they became co-champions this season with a record of seven wins and one loss. The highlight of the season was beating rival Highland Park by a score of 13-12 in a back-and-forth thriller. Jada James was an offensive force with seven home runs. Theo Burr had four home runs. Madison DeGaetano and Kayla James each had three homers. Annelise Purcell, Annaya Boyd, Tenia Childs and Abigail Altman all played key roles for the Pilots as well.

Badminton— The Pilots finished another successful season with a third-place finish and a record of nine wins two losses. Seventh-grader Betty Hebble was Murray’s top player. She finished third in the St. Paul City Conference middle-school tournament. Eighth-graders Taylor Fairbanks and Jaela McQueen formed a strong doubles team that advanced to the quarterfinals of the city tournament.

Baseball— After waiting for all the snow to melt, the Murray Pilots finally took to the field in May. They picked up where they left off last season and once again competed for the conference crown. In the end, Highland Park came out on top and the Pilots finished with a record of seven wins and two losses for the season.