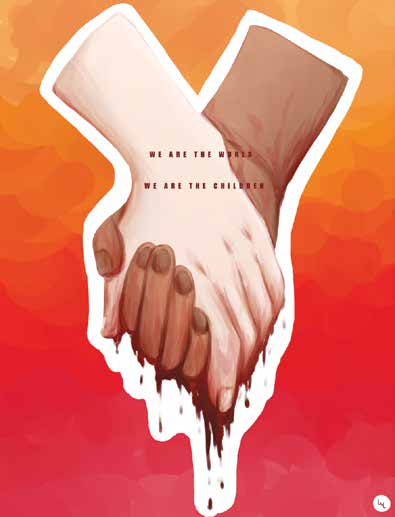 Vang’s piece of art incorporates the global pandemic, death of George Floyd and civil unrest—a work that she shared with her teachers and that, in turn, led to widespread viewing in virtual classrooms and positive postings on social media.

“No matter how hard everything may seem, just know that the good outweighs the bad,” Kashia says in describing the message of her drawing. “No matter what color or race you are, we are all humans, we are in this together. Always love and show kindness. Here is a drawing I made to represent all of us together.”

In other Como Park High news

The end of the 2019-2020 school year marked the retirement of eight longtime Como staff members and the departure of Principal Stacy Theien-Collins who will become principal at Richfield High School.

Meanwhile, the Como staff members who retired at the conclusion of the school year had a combined 229 years of service in education. Each retiree has positively influenced countless students with their commitment, diligence and talent. The retirees are:

Kathy Kahn—Kahn was a teacher for 37 years, including the past 30 years as a biology instructor at Como.

MaryClare Bade—Bade was a health teacher at Como for the past 34½ years. She spent a total of 36 years in education.

Lori Belair—Belair spent 26 years with the St. Paul Public Schools. She taught family and consumer sciences at Como since 2010.

Dave Stahlman—Stahlman was a social studies teacher at Como for 25 years.

Walt Lofquist—Lofquist was a math teacher at Como for 20 years, with 21 total years in St. Paul.

Joy Fausone—Fausone cheerfully worked in the Como cafeteria for 30 years.

Ruth McPhillips—McPhillips was an educational assistant for 28 years, with four years at Como. Eric Erickson is a social studies teacher at Como Park High School and a regular contributor to the Bugle.