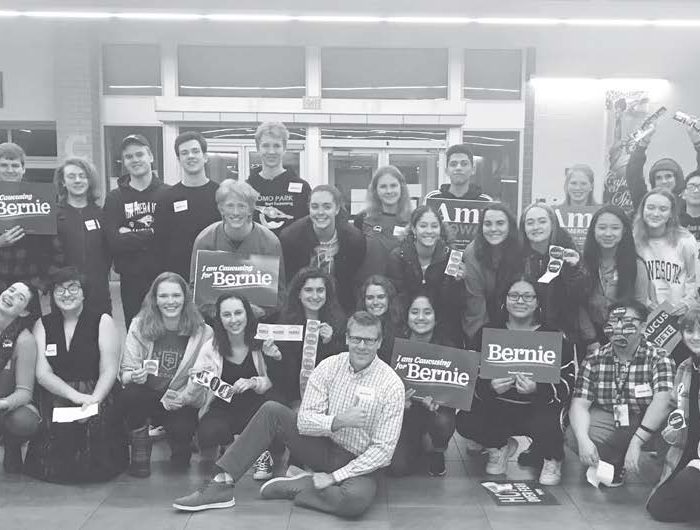 Forty of my AP Government students witnessed democracy in action on Feb. 3 at the Iowa Caucuses.

The whirlwind political adventure included a chartered bus ride across the Iowa border into Cerro Gordo County. After a brief stop and walk in Clear Lake, our field trip reached its destination of Mason City.

Following dinner at The Pizza Ranch, we headed to a Republican caucus site. We met with the county Republican chairperson to learn about Republican caucus procedures and to ask student-generated questions. After another Republican speaker, and observation of caucus-goers filing in, we hopped on the bus to see a Democrat Party caucus.

Iowa Democrats use a unique procedure of standing together for their preferred candidate, being completely public about their support. Then there’s reallocation for candidates who didn’t earn 15 percent of the vote. While complicated, it’s was a vivid example of voting and political participation.

My students’ observations ranged from, “It’s an interesting way to choose a potential presi­dent,” to, “There’s a lot of old people,” to a lot of questions on the way home—including, “Why can’t they get their votes reported?” when we were searching for results.

Several students had never been to Iowa before and were surprised to see such rural landscape and a lack of racial diversity. After five hours on the ground in Iowa and meeting its people, we got back on our chartered bus and headed north, arriving at Como High just before 11 p.m.

The goal in bringing students to the Iowa caucuses was to create a connection with the electoral process and inspire political participation going forward. Plus, it’s a unique and fun memory.

As a teacher, I know students may not remember my lessons about nominations and campaigns or our reading about separation of powers in Federalist 51. But they will never forget the Iowa Caucus—and how decisions are made by those who show up.

About half the AP Government students will be able to vote in their first presidential primary on March 3. Another 20 plan to serve as Ramsey County election judges.

History Day at Como featured the research and final products of 11th grade U.S. History students and any other student who desired to produce a history project in addition to their regular coursework. Students advancing to St. Paul regional competition include the following:

• Individual Documentary—Wim Lenkeit for “The Fall of the Berlin Wall,” Alisaed Ali for “Redoshi: Last Survivor of the Middle Passage,” Kashia Vang for “Loving v. Virginia.”

• Individual Performance—­Olivia Miller for “Jim Henson and The Muppets.”

The annual Como Park Booster Club fundraiser at the Urban Growler will be 3 to 7 p.m. on March 22. For questions or ticket information, email comoparkboosterclub@gmail.com.