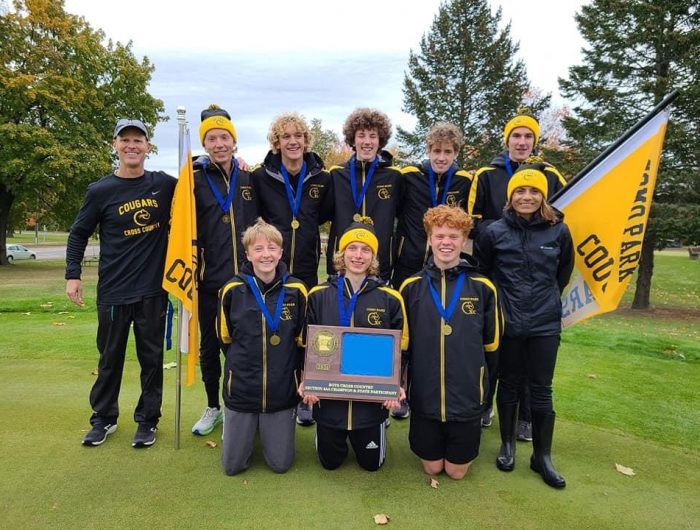 A full, complete season of activities, accompanied by supportive spectators, made the fall of 2021 memorable for Como student athletes. Here’s a sports recap, beginning with a historic accomplishment in cross country running.

For the first time since 1981, the Como boys cross country team qualified for the State Meet. The Cougars won the Section 4AA Meet on Oct. 27 in impressive fashion, beating second-place Mahtomedi by 16 points and nine other teams by even larger margins.

Como junior Charlie Power-­Theisen ran the 5K course at Highland Park in a blistering time of 15:59 to also earn the individual title.

The top five finishers for each school make up the team score. In a field of 75 runners, Como juniors Mason Aarness and Liam Schwie were seventh and eighth place respectively, while seniors Soren Sackreiter and Owen Finlay finished 11th and 16th—all in the 17-minute range.

The Cougars team effort is a byproduct of disciplined training that the boys have put in for years, including consistent summer workouts.

“It’s nice to see all the work pay off,” Finlay said. “We thought we had a chance to make state, and to get there feels good.”

The Minnesota State meet was held at St. Olaf College on Nov. 6, which was an unusually warm day. The team finished 14th for Class AA in a day of challenging conditions.

Senior Dylan Aarness returned to the state line-up after overcoming an injury and scored for the Cougars, along with his brother Mason, Power-Theisen, Sackreiter and Schwie. Finlay and Sig Isaacson rounded out the state roster.

For guiding the Cougars to their best season in 40 years, Tim Kersey was selected the St. Paul City Conference and Section 4AA Coach of the Year. He credited the team’s success to the commitment and work ethic of his runners.

“I enjoyed seeing how genuinely happy the team was when they were holding the section championship trophy,” Kersey said. “They don’t just give those away. The kids were consistent and made sacrifices.”

The team peaked at the Section 4AA Meet with a fifth place overall finish out of 10 teams in the competition. Senior Saylor Landrum earned All-Conference. Sophomore Anna Lovat and freshman Margaret Spray were All-Conference honorable mention.

The Cougars improved as the season progressed, pulling off an upset victory over St. Anthony Village in the first round of the section playoffs. In the St. Paul City Conference, the girls finished in third place with a 7-5 record. The overall record for the year was 11-11.

A challenging non-conference schedule to start the season led to growth and successful results in the second half. The Cougars went 4-2 in conference play and finished third in the St. Paul City.

Senior captain Eva Larson concluded her career with another All-Conference performance at No. 1 singles. The team finished 2-4 in the St. Paul City in fifth place. With 18 girls in the program and Larson the only senior, the team’s future is promising.

The Cougars posted an overall record of 6-6-4. Senior captain Soren Berg was named to the Minnesota All-State team in addition to his All-Conference recognition. Senior defender Ethan Lee was also an All-Conference selection.

With the return to a full schedule and competition in the Twin Cities District for 2021, the Cougars rebounded from an 0-3 start to finish with an overall record of 4-6.