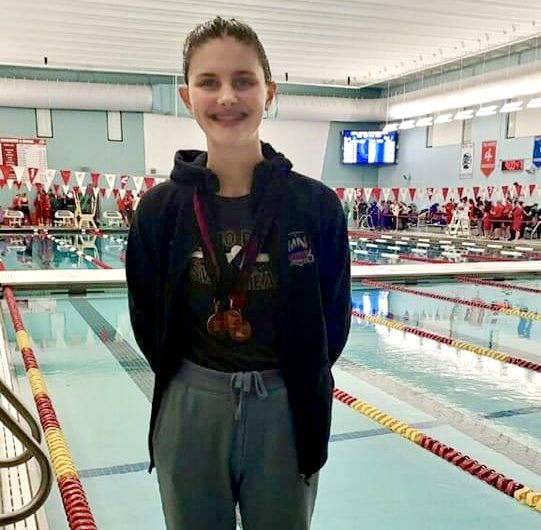 Here is a review of the fall sports season and preview of Cougar high school winter sports.

The Como girls swimming season usually ends at the section meet in the first half of November.

But the 2022 fall season had an extended run after freshman Aleia Lueck qualified for the state meet. The result brought joy to the entire team as they celebrated the achievement and continued to train with Lueck as she prepared for state.

Lueck entered the Section 4A meet with a goal of setting a personal record in the 50-yard freestyle. When she touched the wall with a time of 24.99 her primary goal was reached, with the bonus of qualifying for state!

At the University of Minnesota Aquatics Center for her state debut, Lueck’s swim nearly matched her best by clocking in at 25.11.

Another Cougar highlight from the Section 4A meet was the performance of the 200-freestyle relay team. Junior co-captains Sophie Warner and Mia Trifilette-Simons, along with Lueck and fellow freshman Harriet Miller, earned 7th place medals in the finals. Their season-best time was just 1.5 seconds off the school record.

With everyone returning next year, the team hopes to break more school records and qualify more swimmers for the state meet.

Volleyball to section championship: As previously reported in the Bugle, the Como girls volleyball team rose to the top of the St. Paul City Conference and earned a share of the championship along with Central and Highland.

The post-season concluded with an exciting run through the Section 4AAA Tournament and all the way to the championship match. The Cougars earned the No. 2 seed, which allowed them to host both the quarterfinal and semifinal rounds on their home floor in front of their enthusiastic student section.

They defeated Harding 3-0 in the quarterfinals. The semifinal versus Hill-Murray was a dramatic 3-2 comeback victory. The Cougars surprised the No. 1 seed Mahtomedi by winning the first set before falling 3-1 in the championship match.

Players, coaches and fans will fondly remember the 2022 Como volleyball season after a conference championship trophy, a section runner-up trophy, an overall record of 17-9 and energetic fan support.

Girls Basketball: Even after the team’s historic run to the state tournament semifinals last season, and subsequent graduation of five seniors who are now playing college basketball, expectations remain high.

And with good reason.

This year’s senior class is led by Shania Nichols VanNett who has been scoring three-pointers for the Cougars since middle school, Kayla James who is a top rebounder and streaky scorer with years of experience, and Zhane Singer who is a force in the post.

Several other returning players from last year will take on larger roles. The coaching staff is confident they will be able to step up based on their ability, work ethic and off-season development.

With comfortable early season victories over non-conference foes such as Simley, Bloomington Kennedy and Cretin-Derham Hall, confidence is rising and should serve the Cougars well as they pursue their ninth consecutive St. Paul City Conference and Twin Cities championships.

Boys Basketball: There will be many new faces on the Cougar varsity team this winter. Junior sharpshooter Mason Aarness is the lone starter available from last year’s team that finished 10-2 in the city conference. Senior Levi Nichols was expected to start again but is unfortunately out for the year following surgery for a torn ACL suffered during football.

Out of the void, first-year varsity players will have an opportunity to lead. Senior Oliver Pletch and sophomore Dejuan Jones have potential to contribute significant scoring and rebounding. They’ll be encouraged by Nichols whose commitment to the team will be apparent with his presence on the bench.

Boys Swimming: Six swimmers who represented Como in the state meet last season are back for the Cougars, led by senior captains Gabe Napierala and Sig Isaacson.

There are three relay events in high school swimming and Como aims to repeat as state qualifiers in all three distances. With experience and depth, the Cougars also hope to earn a second consecutive conference championship — something they accomplished last season for the first time since 1991.

Nordic Skiing: A community effort to support and equip any interested skier is holding its momentum as the Cougars prepare for a fun winter. The roster boasts 45 skiers, with 30 receiving all their equipment (skis, boots and poles) from donors.

Boys captain Liam Schwie and girls captain Sophie Warner will lead a group who is collectively young, evidenced by two-thirds of the team being sophomores, freshmen or middle schoolers.