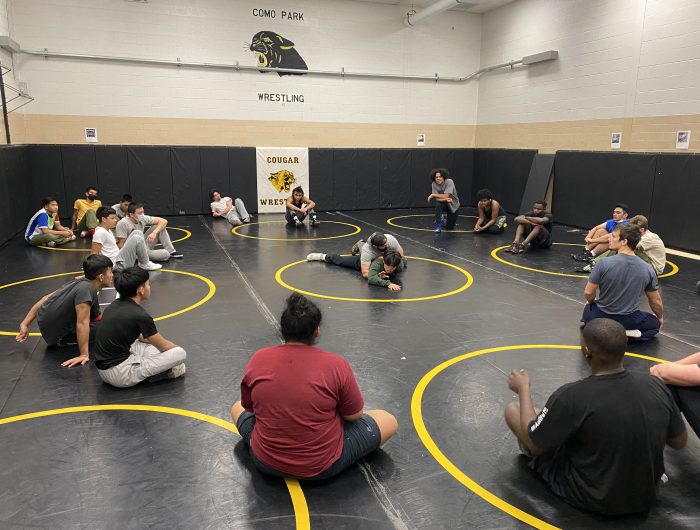 At Como, that meant student athletes in girls and boys basketball, boys swimming, wrestling and Nordic skiing were back in action representing the Cougars. There are also co-op teams in St. Paul Public Schools for a few Como hockey players, gymnasts and an Alpine skier.

For a preview of each Cougar varsity team, we offer Bugle readers this introduction. Complete schedules for all Como and St. Paul City Conference teams can be found at saintpaulsports.org.

The senior class of this year’s team is the deepest and most talented one the seven-time defending St. Paul City champions have ever had.

“They all bring something special to the table,” Coach Olonda England said. “With their leadership, this season will be great for those coming behind them as they will have the opportunity to learn from some talented young ladies.”

The Cougars are aiming to break through the section playoffs and qualify for the state tournament berth that has eluded them since 2016.

To prepare, England put together an extremely challenging non-conference schedule that includes perennial state power Hopkins and other highly ranked teams from Class 4A (the largest enrollment schools.) Como is assigned to Class 3A and will likely need to go through De La Salle to reach state.

“The schedule will help mold us for sections,” England said. “We’re looking forward to a full season and having fans in the stands. Our focus is to prepare to be champions on and off the court.”

Coach Donnell Gibson is excited to continue the work of building a winning culture with his program. After last year’s abbreviated season, there’s anticipation of being competitive in the St. Paul City Conference while also developing life skills to help each player reach academic goals and succeed after graduation.

“I think this year will be amazing because we have players that started together years ago finishing together,” Gibson said. “Each player has a unique role in what makes us a team and a family.”

Gibson expects seniors Amir Plair and Donovan Clinton to step into greater leadership roles this year as captains. He adds that several starters and key contributors are multi-sport athletes who bring different skills and experiences to improve the team.

Senior captain Soren Sackreiter and junior captain Gabe Napierala, along with junior Sig Isaacson and sophomore Kai Sackreiter, had a taste of the state meet last year as individual qualifiers.

This year they’re striving to have their entire team be competitive at the state level. With several other returning varsity swimmers and a full season for abdominal work and weight lifting, the Cougars are eager for new competition. They embrace challenging training sessions and look forward to seeing how far their improving swim times can take them.

The Cougars return some key wrestlers to their roster including senior Aaron Adekplovi and junior Ve Ah Ree Shar, who both advanced to a preliminary round of state tournament competition last year.

Joining them as team captains this season are senior Justus DeLoach and junior Thay See. The combination of veterans in the upper weight classes, along with developing talent in the lower and middle weight ranges will make the Cougars a formidable team in the conference.

With nearly 40 participants in the program, coaches Sasha Van Voorhis and Dylan Adair are hoping for snow! A consistent winter of snow would help technical training sessions and provide more opportunities to compete in meets.

For two senior leaders, the event circled on the calendar is the state meet on Feb. 16. Girls captain Saylor Landrum and boys captain Owen Finlay both have realistic opportunities to qualify while also helping mentor younger skiers.

“We have over 25 athletes who are in 10th grade or younger,” Adair said. “We have a goal of preparing them for higher level racing when they get a little older.”