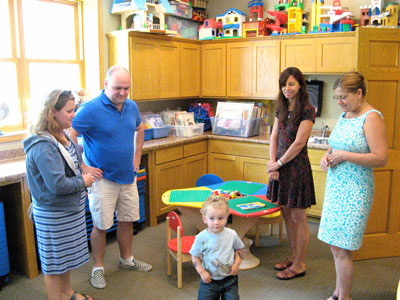 Young Henry Zachman was the center of attention during an open house at the Como Park Language and Arts Preschool and Childcare Center. Co-owners Laurie Erickson and Nancy Shellum, second from right and right, respectively, showed their new classroom to Henry’s parents, Lauren and Ben. The Zachmans are weighing future preschool options for their son. (Photo by Roger Bergerson)

Although it’s only been operating for two years, a local preschool has already expanded its facility to keep pace with enrollment demand.

Remodeling at Como Park Language and Arts Preschool and Childcare Center, 1503 N. Hamline Ave., has resulted in a bigger art room, a new classroom in the former garage, an additional bathroom and, thanks to a grant from the Capitol Region Watershed District, a rain garden in the back.

Initially, co-owners Laurie Erickson and Nancy Shellum handled the teaching duties, but with enrollment growing—there will be 32 children a day for the 2013-14 school year—they’ve been able to add two full-time and two part-time teachers.

In fact, the additional space would actually allow them to enroll a total of 40 students, but they’re going to grow into it gradually, Erickson said. That means there’s a waiting list.

“Our only regret is that we can’t accommodate everybody,” said Erickson.