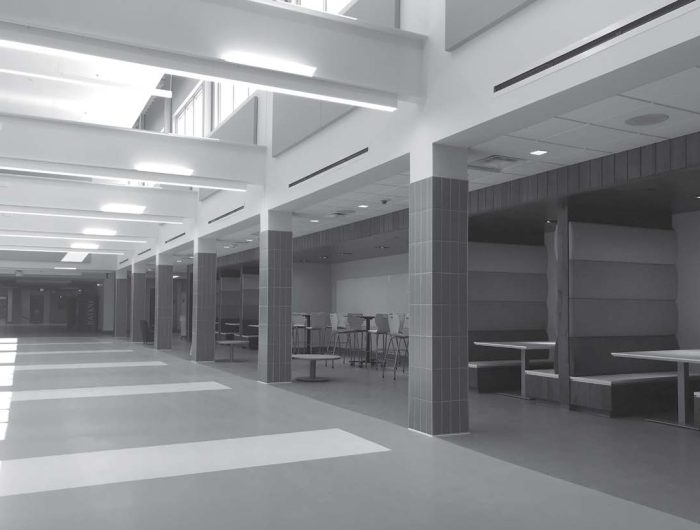 Construction and remodeling of Como Park High School, including a massive overhaul of the building’s main entrance, continued through the summer and will proceed into early 2020.

At completion, there will be a clear main entry to the building with ample natural light in a welcoming atrium, while also having a secure point of entry adjacent to the main office. Total cost of the remodeling and construction is $46.8 million.

Meanwhile, administrators and clerical staff will work out of a classroom near the west wing door that is serving as the temporary main office until the scheduled completion of the new space in early 2020. The cafeteria and the adjoining student commons area have been opened up to allow for easier movement throughout the building, more natural daylight, and a brighter area for meetings and study groups.

Nearly every classroom has been remodeled or refurbished in the project. And with the addition of a two-story classroom wing on the south end of the building completed one year ago, a transformational change to the physical space is occurring at Como that will serve students for decades to come.

All are invited to participate and celebrate the Como school community with healthy activity for multiple abilities, followed by festivities that will include food trucks, socializing, and the homecoming football game on Como’s turf at 1 p.m. vs. Minneapolis Southwest.

“Shifting from the parade that Como has had for many years, we wanted to get something healthy and fun for the community that would bring more people in,” said Como Athletic Director Koua Yang.

Como Lake is just a couple hundred yards from the school track and football field. With such a popular, beautiful resource in the neighborhood, connecting Como Park High School events to it and the larger community is a goal.

For those willing and able, the 5K will be two laps around the lake. The Fun Run will be one lap around the lake, totaling 1.6 miles. For young children, there will be a Kids Fun Run around the track at school.

Registration details will be available on the school website, social media sites, and paper flyers. All 5K and Fun Run participants will receive a free ticket to the football game. Additionally, there will be opportunities to volunteer at the event and/or donate to the cause.