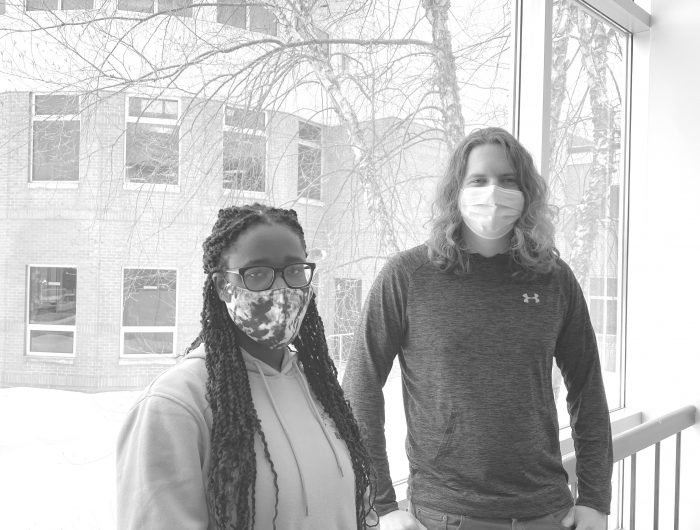 The duo won three of their five debates during the state meet held in January, improving upon their previous performance by advancing to the quarterfinal round of the Policy Division.

Due to ongoing pandemic precautions, both the section tournaments prior to state and the culminating event were held virtually. However, practice sessions held in person at school this season afforded the team opportunities to operate more efficiently and enjoy camaraderie.

“Debating online doesn’t have the same energy,” Skinner said. “You’re not in the room, you’re not reacting immediately and you miss out on the community element. We had much more fun developing our arguments while being together in the same space, collaborating and having support from coaches.”

Debate teams prepare arguments for both sides of a policy issue. This year’s resolution focused on the environment: The United States federal government should substantially increase its protection of water resources in the United States.

Teams don’t know which side they’ll be assigned to argue until the moments right before a debate begins.

Skinner explained that their affirmative arguments were based on banning fracking because it pollutes waterways and resources. Their arguments opposing the resolution were founded on the presumption of settler colonialism.

Extensive research providing support and evidence for either side, coupled with effective communication are keys to debating success.

Chijioke and Skinner began high school debate as novices. The two state tournament qualifications during their junior and senior years reveal the development of their talent. More than “being good” at debate, they both enjoy the process.

“I like engaging in an activity that makes me think about real world issues and stimulates critical thinking,” Chijioke said.

Unlike most competitive high school activities, there is a national tournament for debate and qualifying is done independently of state meets.

Last December at a district tournament, Chijioke and Skinner seized their opportunity to qualify for nationals. They’ll travel to Louisville, Kentucky in June for the National Speech and Debate Tournament.

“I am proud of us because we have really improved,” Chijioke said. “I’m pretty excited for nationals and I think it’ll be a good conclusion to my high school debate career.”