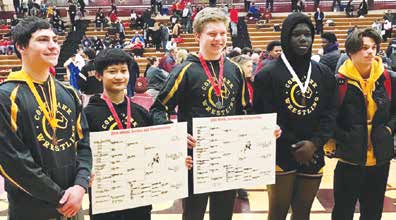 Como’s winter athletics season wrapped up before the coronavirus halted all school and sporting activities.

For student athletes, their athletic competition helped them develop deeper bonds with peers and the Como school community. Here’s a summary of Cougar winter sports.

For two Como Park Cougars, the season concluded where every wrestler wants to be: The state meet at the Xcel Energy Center.

In his second competitive season of wrestling, junior Bleah Paw placed second in the Section 4AA Meet in the 113 lb. weight class and qualified for state. He became the first Karen wrestler representing Como to ever go to state.

Junior Sully Lucy placed second in the 195 lb. division of the Section 4AA Meet to earn his way to state. Having won the city title in the 182 lb. class as a sophomore, Lucy kept improving in the heavier weight class and peaked in the section tourney.

Both state entrants lost their first-round matches at state. But the reward of getting there will be a goal to shoot for next year.

The Cougars finished an exceptional season by collectively posting 30 personal best times in the Section 4A Meet at St. Catherine University.

Out of 12 teams in the section, Como placed fourth overall. As for the specific races, the top three finishers in each event advance to state competition. In the three relay events, Como’s personal-best times came close to qualifying.

With just two seniors graduating from the program, the Cougars are looking to build on their achievements for 2021.

As previously reported in the Bugle, new Cougars coach Donnell Gibson inherited a young team and was focused on building relationships this season. While Como didn’t post wins on the varsity level, the team showed resiliency by sticking together and competing against bigger, more experienced opponents. With no seniors in the program, Gibson looks forward to every player returning and improving next season.

A rare season with consistent snow created a memorable experience for the hardy Cougars. Como is one of three St. Paul public schools with a Nordic team. To increase competitive opportunities, they participate in the larger Twin Cities Nordic Conference. The Como boys finished fifth in the conference and the girls finished sixth.

Senior Alistair Pattison placed ninth out of all individuals in the boys conference meet, earning all-conference status. Sophomore Owen Finlay and senior Nick Jacobsen were consistently the next top finishers for Como throughout the season.

In the Section 4AAA tournament, Como defeated Visitation 63-38 in a quarterfinal match-up at home. The Cougars, seeded No. 3 in the section, squared off against No. 2 seed St. Croix Lutheran in an intense semifinal. With a 62-58 victory, Como advanced to the section final versus No. 1 seed Simley.

The Spartans started four seniors and possessed a significant height advantage over Como’s five starting sophomores. But the Cougars battled, displaying their trademark intensity and hustle. In the end, however, the Spartans upended the Cougars 69-53 and their dream of a state berth for this season.

With an overall record of 21-5 and every starter returning, the team is set to compete for a shot at state next year.

Sophomore Ronnie Porter was honored by the Pioneer Press as one of five finalists for the East Metro Player of the Year. Porter and fellow sophomore Kaylynn Asberry reached the 1,000-point career milestone in January. The dynamic duo both earned All-Conference in the St. Paul City.

Meanwhile, in related news the Murray Middle School girls’ basketball team had another stellar season. For the second consecutive season, the Pilots were undefeated in the middle school division of the St. Paul City Conference. The team will carry a 25-game winning streak into next season with eyes on a three-peat.