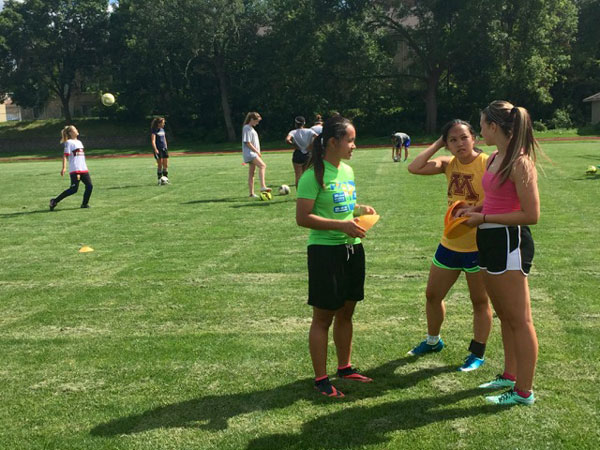 High school sports are back in session. Opening practices for the fall athletic season in Minnesota officially commenced on Aug. 15. Student athletes from several sports spent portions of their summer doing individual conditioning, playing for club teams and participating in voluntary workouts with their high school coaches during the June and July summer training window.

While the first day of school in St. Paul is after Labor Day, student athletes will have already represented their schools in several games and competitions before they walk through their classroom doors. For the Como Park Cougars, it promises to be another exciting fall. Here’s a preview:

Boys soccer—With 10 returning varsity players, coach Jonah Fields is excited about building a new competitive team. The Cougars will work toward becoming interdependent and blending their talents into consistent effort. The St. Paul City Conference is one of the strongest soccer conferences in the state. Playing against strong opponents in the city, in addition to a challenging nonconference schedule will give the Cougars a glimpse of what they’ll need for another successful post-season run through the Section 4A play-offs.

New to the program this season will be a trophy game versus crosstown rival Humboldt. The “Mayor’s Cup” is dedicated to Mayor Chris Coleman’s commitment to growing the game of soccer in St. Paul. Coleman will present “The Cup” to the winning team after the game on Sept. 16 at Como.

The Cougars will work to improve upon that record in 2016, beginning Friday, Sept. 9, in a game against Harding, the only other St. Paul team on its schedule. The season opener will be played at Griffin Stadium at 7 p.m. Junior quarterback Robert Adams, an All-District Honorable Mention player in 2015, is poised to lead the Como offense again this season.

Cross country—Under the leadership of coach Tim Kersey and new assistant coach Jim Rue, the boys and girls teams will train together and build upon recent success. The boys team is led by the defending St. Paul City champion, senior Innocent Murwanashyaka. Innocent’s goals include repeating as the conference champion and competing in the state tournament, where he had a top-10 finish last season. Junior Eli Pattison will be joining Innocent as a co-captain for the boys this season.

The girls team also features the defending St. Paul City champion, senior Florence Uwajeneza. Florence has been running all summer to be in peak form for another title. She will be a co-captain for the girls along with junior Ana Caballero.

The total number of participants in the combined cross country program is expected to be 35 this season. In addition to the city varsity and junior varsity meets, the runners are enthusiastic about the opportunity to run in the enormously popular Roy Griak Invitational on Sept. 24 at the University of Minnesota’s Les Bolstad Golf Course.

Girls soccer—The Lady Cougars will be led by new head coach Kyle Johnson. Expect an emphasis on creative play and developing young talent. This is an exciting time for Como Park girls soccer, as numbers have increased in the last two years with more participants spending more time playing the game. Coach Johnson developed and implemented a variety of training sessions in June and July, and the impact has carried over as captains ran practices in August prior to opening day.

The St. Paul City will feature tough competition, and Section 4A is loaded with strong teams on the girls side. With that in mind, the Como girls have overall goals of working hard, having fun and getting better each game.

Volleyball—The Cougars enter 2016 as the defending champions of the St. Paul City Conference. An extremely talented senior class graduated in June after earning two city titles during their time at Como and producing two Division I college players. The returning Cougars will be working hard to keep the program at a competitive level, and they will be doing it with new head coach Jill Bachmann.

After serving in the program for several years coaching younger players on the C-team, Bachmann steps into the varsity position with positive energy and a plan to keep building skills in every player.

Girls tennis—Senior captains Mira Kammueller and Lizzy Larson will lead the Cougars on the courts. The team finished in the middle of the pack last season with a 3-3 record in the St. Paul City Conference. With experienced and dedicated leadership, complemented by younger up-and-coming players, the team has goals of holding their position in the middle of the conference and having fun playing a sport they love.

Girls swimming—The swim team placed fourth in the St. Paul City last season. This year’s team is balanced with swimmers from all grade levels and should continue to be competitive. Finishing in the middle of the conference is a realistic goal again. The ladies that represent Como Park in the pool will put in miles of training laps and speed intervals through early November, which is when the section meet will be held.

Eric Erickson is a social studies teacher at Como Park High School, and a long-time coach of school and youth sports in St. Paul.