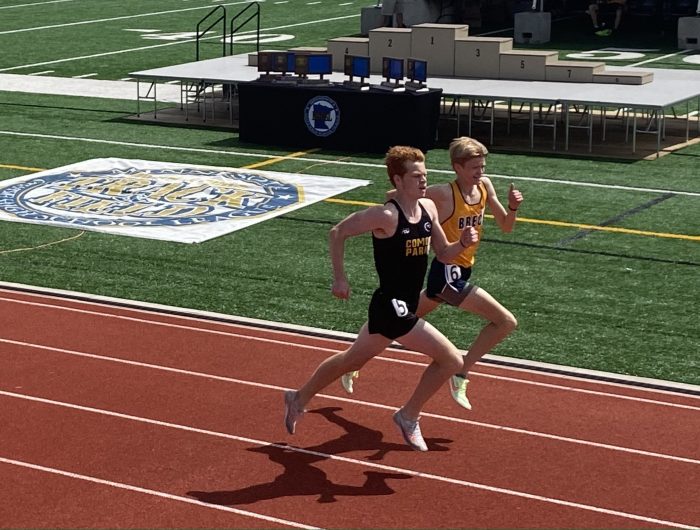 For the Bugle community, we offer a snapshot of the spring sports season at Como Park Senior High.

Power-Theisen qualified for state in style by racing to victory in his two distance events at the section 4AA meet. In becoming a two-time section champion, he duplicated city conference titles from the previous week’s competition.

Overall, the Como boys team placed third in the conference. With dozens of individuals registering top-five finishes, competitive teams in every relay and senior Rais Jaffer taking second place in both hurdling events, it was a balanced and collective effort.

The girls team also placed third overall in the conference. The 4 x 400M relay team was a reliable point producer for the Cougars. Seniors Ronnie Porter and Saylor Landrum combined with sophomores Greta Seppanen and Alice Wagner-Hemstad to take third in the city meet and a fifth place medal in the section 4AA meet.

Sophomore Ellery Tennison was selected the girls MVP with top-five finishes in three events at the city meet, plus medals for both hurdling races at the section meet.

Other top-tier performances from the city meet included Landrum placing third in the discus throw and sophomore Sahara Hinton tying for second place in the high jump.

Softball: The Cougars came together with a combination of senior leadership and youthful energy to produce a 4-2 conference record with 10 wins and 7 losses.

Jada James hit eight home runs this season, bringing her career total to 15 and setting the program record. The most memorable game was a 21-20 playoff victory over Harding, in which the Cougars trailed by a dozen runs before winning in walk-off fashion.

Como senior PaNra Lee elevated her game in the individual state tournament, upsetting Johnson’s top player in the quarterfinals to reach the semifinal round. After losing in the semifinals to the eventual state champion, Lee bounced back to win the third place match in straight sets to bring home the bronze medal.

Girls Golf: The Como golfers connected and improved through the spring and took third place in the conference standings, which was their best finish in the St. Paul City during the past five years.

Boys Tennis: With 15 first year players in the program, the Cougars posted a conference record of 2-4 at the varsity level and 3-12 overall. Seniors Quang Bui and Isaiah Cooper were All-Conference players. Seniors John Oo and Hsar Lay Moo were honorable mention as was Swedish foreign exchange student Hugo Borg.

Baseball: Como’s record was 3-6 in the city conference and 5-10 overall. The two non-conference victories over St. Anthony Village and St. Paul Academy stood out as peak performances.

Boys’ Volleyball: With a 10-1 regular season record in Minnesota’s club volleyball association, the Cougars qualified for the state tournament (scheduled for June 15-16 as the Bugle went to press.)