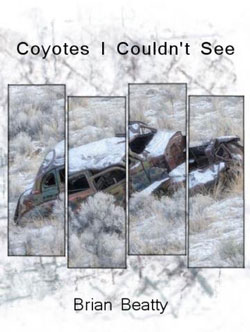 Como Park resident Brian Beatty published a book of poetry in August and has another one coming out in late 2016 or early 2017.

Coyotes I Couldn’t See was published by St. Paul-based Red Bird Chapbooks. The limited-edition collection includes lyric and narrative poems written and published over a two-year period. The poems originally appeared in print and digital publications in the U.S., Australia, Ireland, New Zealand and Scotland, as well as in digital broadsides on the website of the Walker Art Center in Minneapolis and in Motionpoems’ 2014 “Arrivals and Departures” public art project showing short films on the facade of the historical Union Depot train station in downtown St Paul.

Coyotes I Couldn’t See is available from the publisher’s website, www.redbirdchapbooks.com.

Brian Beatty moved to Minnesota in 1999 and to St. Paul in 2015. He self-published a humor collection, DUCK!, in 2009 and has performed as a comedian and storyteller.