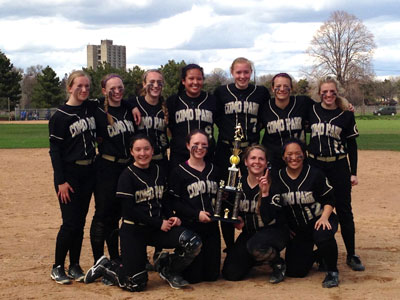 The 2014 season has been like many others for the Lady Cougars, characterized by hard work, quality pitching, timely hitting and sound fundamentals. What’s unique this year is youth. The Cougars start only two seniors, but the youthful line-up has come together quickly and multiple team records are being broken.

Coaching a talented but young team can often be a roller-coaster ride, but Como’s veteran head coach John Fischbach says it’s been smooth, thanks to senior co-captains Cindy Pawlitschek and Grace Jensen.

“They are both outstanding leaders. They are always positive, respectful of their teammates, helpful, reliable and just first-class individuals,” said Fischbach. “Our No. 1 starting lineup consists of one freshman, five sophomores, one junior and the two senior captains.”

The molding of a team may also have something to do with Fischbach’s 23 years of coaching softball at Como. With a career record of 315-178 (at press time), Fischbach has led many winning teams, but he never had an undefeated team in May or had a team ranked in the state’s top 10 until this year.

With a record of 19-2 at press time, the Cougars were ranked No. 9 in Minnesota’s Class AA Coaches Poll. The team has set goals of going deep into the Section 4AA playoffs and team members feel they are one of six strong teams in the section that could extend the season into June.

In addition to the almost-perfect record and state ranking, the Cougars are also breaking single-season offensive statistical records. The 12 home runs produced this season are an all-time high.

“There are realistically seven girls in our line-up who could hit one out on any given at bat,” said Fischbach. Other record-breaking stats include outscoring opponents 198-24 and a team batting average of .473.

When the Cougars aren’t hitting the ball all over the park, the pitching staff has been setting down opponents efficiently. A “staff” is another exciting development this season. For the first time, the varsity team has three pitchers.

Pawlitschek is experienced and reliable with three wins on the mound: Sophomore Brianna Menssen is 5-0, with a 1.33 ERA (earned-run average), and freshman Kathryn Proper is 7-0 with 83 strike-outs and a 1.00 ERA.

“[Proper] is now our No. 1 starter,” said the coach, “and handles the pressure as a ninth-grader without question.”

Having three high-quality, relatively interchangeable pitchers is rarely seen in high school softball in the conference. Batting averages of more than .500 are also rare, but the Cougars feature two players at that level with junior Grace Maruska batting .588 and Pawlitschek at .533.

Sophomores Delilah Wolf and Bekah Hausman are also near the .500 mark. Sophomore Emma Hartman is the everyday catcher and leads the team in runs scored with 26, while sophomore Cassie Prescott (first base) has scored 18 runs.

Beyond sweeping through the conference season, the Cougars won two tournaments against nonconference opponents, including the Como Park/North End Invitational. They also won the Nicollet Tournament in southern Minnesota.

The team is a tightly knit positive force on the field and strong role models for Como’s JV team, C-team, and younger softball athletes in the area as well. “Wearing the Como Park softball uniform is a privilege,” explains Fischbach. “Sacrifice, commitment, and dedication are all words that we take to heart.”

Taking conference championship trophies back to school has become part of the Cougars softball culture as well.