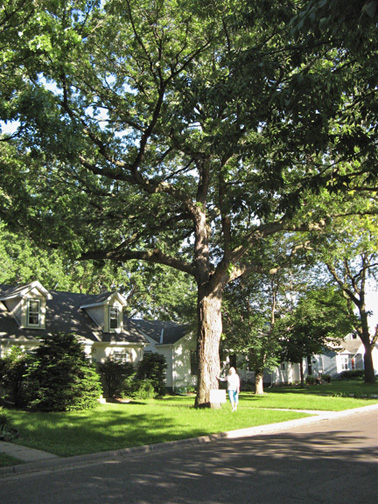 In June, the Como Community Council’s Environment Committee selected six neighborhood homeowners and their eight trees to honor with Como Tree Appreciation Awards. This is fourth year of the program.

Chosen from nominations submitted by the public were a magnolia, bur oak, honey locust, two maples, and a mini-orchard of two plums and an apple.

“The appreciation program has really grown in four years, to the point where we had quite a few nominations this year, all of them great trees, and it was tough to select the final awardees,” said Val Cunningham, a member of the committee. “The idea behind this is to encourage our neighbors to value their trees and plant more of them, and we’re hoping it points up how important trees are—not just to homeowners but to the entire community too.”

Kate Lehmann nominated the large red maple that stands near the corner of her lot at 895 Nebraska Ave. and Victoria Street. “It’s such an asset to the corner,” she said, “and it shelters our little house from the elements in all seasons.”

Lehmann loves to share the tree with neighbors, those walking or waiting for the bus and children who might like to climb it. She welcomes people to sit under its branches on the bench made from an old tree trunk—to rest and enjoy its shade and shelter and maybe contemplate the sidewalk poem stamped into the concrete nearby.

A friend nominated Audrey Greschner’s Dr. Merrill magnolia. “This beautiful tree has been tended to with great care by Audrey,” wrote the friend. “It has been the main attraction of my spring for many years.”

In spring the tree is covered with huge white flowers before it leafs out. Greschner, who has lived at 800 Maryland Ave. for 50 years, received the tree as a Mother’s Day gift from her daughter Tammy nearly 20 years ago, but she didn’t know it was a tree.

“I thought it was a shrub,” she said, to explain why she planted it so close to the house. People often come by and ask about her gorgeous tree when it’s in bloom.

The massive bur oak in LuAnn Hudson’s front yard has been there much longer than Hudson or her house. An arborist estimated the tree is about 200 years old, and reassured her that after a trim, it would be good to go for many more years. Hudson bought her house at 1614 Grotto St. nine years ago and recently had the arborist evaluate the tree since there was a split in the trunk that had been reinforced with cables some 15 to 20 years ago. She nominated the tree herself and says it was one of the reasons she bought the house.

In all the years she has lived there, the tree has never made acorns.

A striking maple attracted the attention of a neighbor who passes it on her way to work every morning. “It is so beautifully shaped and extremely lush,” she wrote in her nomination. “In the spring its vivid chartreuse color illuminates the area. It looks as if there is a spotlight shining on it.”

The tree belongs to Jon and Mary Lacho, who have lived at 1300 Victoria St. for more than 20 years. They planted it in the front yard soon after they moved in, but can’t remember its specific variety.

“It was an experimental tree, bred down south,” Jon said, and the garden center he purchased it at wouldn’t guarantee it for that reason. They’ve thinned the branches and trimmed it up, but otherwise it’s grown into its shape on its own.

David Arbeit nominated “Honey,” the honey locust in his front yard. He and his wife, Susan Jane Cheney, moved into their house at 1384 E. Como Blvd. nearly 20 years ago. The tree, more than 40 years old, provides both shade and “wonderfully filtered light through its open lacy canopy,” David wrote in his nomination.

“It has aged gracefully,” he said, and noted that it had been pruned to retain its arching lower limbs, that reach out “like a dancer” and brush against their car roof as they pull into their driveway, “welcoming us back with a gentle caress.”

The tree was bred to be podless, but last year, it grew long bean-like pods—lots of them. An arborist explained that male honey locusts can change genders if stressed by drought.

“We always look forward to watching fresh leaves emerge each year,” Arbeit said, “but now that we know that our transgender tree has an interesting life story to tell we can hardly wait for the next chapter.”

Stefanie McAlpine nominated her husband Jake’s apple and two plums. They bought their house at 844 Hoyt Ave. four years ago, attracted by the large, open yard. Since then they’ve been busy planting, adding life and productivity to the yard, as well as bringing in wildlife and creating a beautiful and relaxing view.

One of Jake’s main goals, said Stefanie, “was to bring the joy of growing and picking fruits and vegetables to our children and the neighborhood children. We have gotten to enjoy fresh picked apples and are hopeful that this summer we will get to taste some delicious plums as well.”

On a recent visit to the home, the McAlpine children, Elinor and Louisa, were excited to find a tiny green plum growing on a low branch of one of the trees—so excited they almost couldn’t wait to pick it.

Because of all the nominations this year, two more trees were recognized with honorable mentions—a red pine at 1476 Holton St. and another maple at 1419 Frankson Ave.

Sharon Shinomiya is a writer who lives in the Como Park neighborhood.