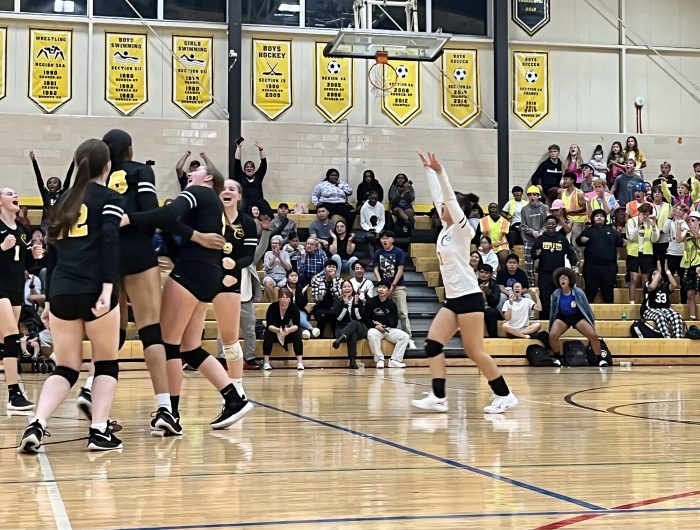 For the first time since 2015, the Como Park Cougars volleyball team were champions of the St. Paul City Conference.

With a 5-1 conference record, Como finished in a three-way tie atop the standings along with Central and Highland.

As the Bugle went to press, the Cougars possessed an overall record of 12-7 with a few regular season matches remaining before the Section 4AAA Tournament started on Oct. 26.

When coach Hannah Wolf began official practice sessions in mid-August, her team displayed an eager attitude and a drive to improve. Several players who started as sophomores were returning, ready to raise the level of their play as juniors.

Early season victories over quality nonconference opponents built the Cougars’ confidence, most notably beating last year’s section champs from Chisago Lakes. By the time conference matches started, Como felt it could compete with anyone in the city.

On Oct. 3, Highland Park came to Como with a 4-0 conference record to take on the 4-0 Cougars. In a dramatic match, Como closed out the fifth set by a score of 15-13 sparking a celebration among Cougar players, fans and families.

That result created an opportunity for Como to clinch the conference outright at Central on October 10, but it wasn’t the Cougars’ night. Central won in four sets forcing the three-way tie for the title.

Junior co-captain Greta Seppanen conceded the loss to Central was disappointing but acknowledged that the overall journey to finish tied at the top was joyful.

Much of that joy was fueled by fans. Families are consistently present with words of encouragement and timely cheering, but the loud and proud classmates added another element this season.

“Our student section has been really supportive and reliable,” Seppanen said.

“There are so many ups and downs in volleyball. The fans are always giving us energy that picks us up if we’re down. It’s been really fun to have them there and to see our bleachers so unified with positive energy.”

The positivity from the student section included many theme nights. Examples included dressing up for Tropical Night, Tie-Dye Night, a “Pink Out,” a “Gold Out” for Senior Night and even Neon/Construction Night (which worked well for the signature win over Highland.)

Unlike many sports, there are abundant celebratory moments in volleyball. Every point played ends with a quick team huddle on the court. If you’re winning most of your points, most of those huddles are energetic. And a chance for the fans to make some noise.

Como’s fans are synched in with the same choreographed actions, gestures and celebratory routines the girls on the floor make after a big point.

With a core group who has played together since their Murray Middle School days, the team has some long-standing traditions. For senior Zhane Singer, playing her first year of Como volleyball after transferring, the Cougar celebrations are new.

“Zhane brings a fun, unique energy because she smiles when we teach her something new and says, ‘I like that!’ That makes the rest of us laugh and enjoy it more because it becomes fresh again for us,” Seppanen said.

Singer plays a key role as a powerful middle hitter for the Cougars. Senior Kayla James is a multi-sport athlete who does the challenging job of blocking opponents’ hits at the net. Senior Dawn Weins is a consistent source of positive spirit who always has uplifting words.

Every other player on the varsity roster is a junior. Seppanen is a third-year varsity player and outside hitter.

Co-captain Ellery Tennison is a natural leader who plays setter. A third-year varsity player, she’s a facilitator who can place the ball precisely where her teammates can maximize a hit. Beyond physical awareness, Tennison also has an ability to address her teammates’ mental state and pick them up with the right message at the right time.

Julia Pletch played varsity as a freshman, missed her sophomore year with an ACL injury, but has returned to excellent form as an outside hitter this season. Mairin Blank is a setter who seeks perfection. According to her teammates, she only wants specific constructive criticism regarding the details of her sets.

Xee Lee is a defensive specialist who hustles to make digs and keep points alive. Kiki Ruddy is a reliable defender and effective communicator. Alice Wagner-Hemstad is a selfless three-sport athlete who covers a lot of court and has leaping ability. Desiree Vang is a first-year varsity player with quick reaction skills at the net.

Together with their supporters, the 2022 Como volleyball team shared a special and successful season.