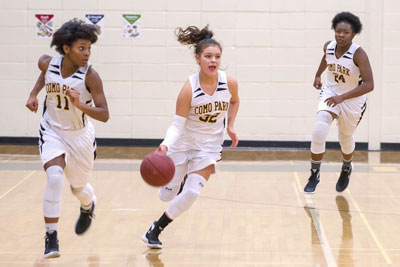 Como winters sports are heating up

The Lady Cougars are off to a strong start in their quest to repeat as conference champions. Sophomore Mikayla Van Nett brought the ball up court in a victory at De La Salle on Dec. 1, with sophomore Raiyne Adams on the left and freshman Elaina Jones on the right. Photo by Mike Krivit, www.krivit.com

The winter sports season began in mid-November and is heating up as we approach the holiday season. Devoted student athletes will continue to practice and compete through the end of February, with potential state tournaments in March.

Here is a snapshot of each Como Cougar winter sports program. For full schedules of all teams and all levels, visit sports.spps.org.

The Lady Cougars are the defending co-champions of the St. Paul City Conference and are seeking an outright championship this season under first year head coach Alexis Gray-Lawson. Senior guard Andrayah Adams, who has committed to St. John’s University in New York, leads a hard-working and youthful team. Adams led the state in scoring last year, but she’s not the Cougars’ only offensive option. Sophomore Mikayla VanNett is a sharp shooter, and several players are opportunistic scorers as well.

Coach Gray-Lawson loves the all-around work ethic of her team. She says that translates into school success and the girls giving back to the community.

The St. Paul Blades is a cooperative team with players from Highland, Central, Great River, Nova and many key contributors from Como Park. One of the Blades captains is Como senior Brianna Menssen. First-year head coach Ryan Paitich is counting on Menssen for scoring punch and says she’s aiming to tally 20 plus goal this season.

Paitich was pleased with the girls’ off-season commitment and training and says the team’s goal is to “outwork” their opponents. The team understands if they buy into that concept, they will be successful and competitive throughout the season and peaking at the section playoffs.

The girls gymnastics team is led by senior co-captain Patsy Thayieng and junior co-captain Josie Schermerhorn. Thayieng is a specialist in the beam and floor exercise. Schermerhorn is planning to compete in the all-around competition, which includes the vault and the uneven bars.

A combination of returning gymnasts and newcomers round out the roster led by new head coach Jill Bachmann. Marv Rouse continues to be an assistant coach, helping with technical training and skills development.

The boys and girls teams are training together under the guidance of another new Como coach, Sasha Van Voorhis. His focus on fitness and technique is described as “intense” by senior skier Tuomas Sivula.

The 25 skiers in the program have a wide range of experience, but Sivula says Van Voorhis “is good at differentiating so that everyone can keep up.” At the varsity level, sophomores Gabe Reynolds and Eli Pattison are expected to be strong contributors. On the girls side, senior Ellie Thorsgaard and Amelia Wilson Jackson should lead the way. Como’s top-level skiers are planning to participate in the Mesabi Invitational at Giant’s Ridge in January.

Tijl Vanderwege is a St. Anthony Park Elementary, Murray Middle and Como Park Senior High alum who is now leading the Como Park wrestling program. Vanderwege has assisted in the program for several years and has great rapport with his student athletes.

Numbers are strong, and there is a core group of experienced and talented wrestlers that will lead the way. The group includes juniors Tha Dah, Kayode Ajao and John Barton and sophomore Drew Barnard. The team’s goals are not oriented to wins and losses but rather on improvement from start to finish. At the end, Vanderwege is confident his wrestlers will grow from their experience and commitment.

The Como Cougars are a cooperative team with players from Como and Central joining forces on the ice. Coach David Bakken says the strength of the team is the defensive core with seniors Jack Freier, Matt Hageman, Kevin Smith, Patrick Kolias and junior Charlie Kray.

Coach John Robinson built up the Como girls basketball program for the last seven years and is now focused on doing the same for the Cougar boys. Under Coach Robinson, the boys are focused on a disciplined man-to-man defense that requires a high work ethic. Early results include two impressive nonconference victories in the first three games.

Academic accountability is the other key point of emphasis for the team. Senior co-captains Demetrice Mitchell and Tommy Fritts “set a great example of what a student athlete is,” said Robinson. The team’s goals are set high, as they expect to compete for the conference championship.

The Como Pool is an energetic place every day after school, as 17 young swimmers train for their competitive meets. The Cougars have been a reliable third-place team in the St. Paul City the last few seasons. However, there are several reasons why the Cougars might move up in the standings. Co-captains Joe McCune-Zierath, a junior, and Cole Napierala, a sophomore, have increased strength and endurance. Sophomores Graeme Thompson, Jared Czech and Noah Friesen return with more experience. Plus there are promising freshmen, including Joe Miller and Frank McGuire. Coach Steve Conery says this group is fit, eager and encouraging of each teammate.