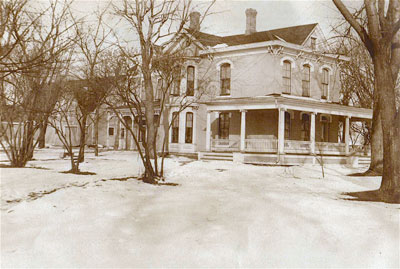 Comodale? It wasn’t a shopping center

A photograph of William G. Hendrickson conveys the impression of a man not to be trifled with, a fitting demeanor for one of the first pioneers to settle these parts.

In 1852, only three years after the Minnesota Territory was formed, the 28-year-old Hendrickson bought 80 acres of land in Rose Township on what is now the Minnesota State Fairgrounds. He married Melvine Moffet, and the following year built the home that would become known far and wide as Comodale near Snelling and Hoyt avenues.

Hendrickson’s neighbors were the few other farmers in the area, Lorenzo Hoyt to the east and Heman Gibbs to the west, among them. In the 1860s, the Ramsey County Poor Farm, home to the indigent elderly, was established to the south.

A successful cattle and horse breeder, Hendrickson often competed for blue ribbons at the Minnesota State Fair, which found a permanent home on the former Poor Farm site in 1885.

When the growing Hendrickson family—he and his wife raised six children—needed more room, he simply bought another house, moved it, then connected it to the original structure.

Hendrickson commissioned Alexis Jean Fournier to paint a picture of Comodale, as he put it, “so that the young man doesn’t starve to death before he gets work.” Fournier later studied in France and went on to become a well-known Minnesota- born painter.

It’s not known why, but Hendrickson retired while still in his 40s and directed the affairs of his family and farm from his armchair. A granddaughter recalled him thumping his heavy cane on the floor if anyone was insufficiently responsive to his wishes.

Hendrickson died in 1900, a few years after his wife, and was buried in St. Paul’s Oakland Cemetery at 927 Jackson St., as were many other pioneers. At his funeral, the minister described him as “one of nature’s noblemen, a country gentleman of the old school.”

The living room at Comodale

In 1907, the State Fair acquired 40 acres of Hendrickson’s former farm, including Comodale, although family members continued to live in the house for at least another decade. From the mid-1930s on, the building was used by the fair’s administration for various purposes, including as an office for the tourist camp. In 1948, the addition was torn down and the rest of the building met the same fate in the mid-1950s.