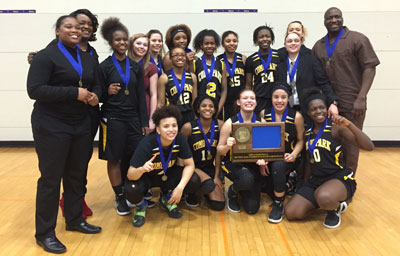 The Como Girls’ Basketball team defeated De La Salle 76-71 on March 10 and won the Section 4AAA Championship. The Cougars’ magical ride came to an end at the state tournament quarter-finals on March 16, but the St. Paul City Champs delighted the community with their spirited play and finishing with an overall record of 24-6.

Amid a trying and tumultuous news cycle with several events in early March that challenged the Como Park Senior High School community, emerged an accomplishment representative of the school and its proud history. The Como girls basketball team won the Section 4AAA championship and is heading to the state tournament.

The team defeated De La Salle 76-71 on March 10 and played their state tournament quarter-final game against Becker High School on March 16. Although the Cougars lost to Becker 62-57, the achievement of getting to state was cherished.

A loud and proud Como crowd enjoyed the ride, and the team will never forget the feeling of playing on the state’s biggest stage. In fact, they plan to be back.

The cornerstone of the Cougars is Andrayah Adams, who played in more than 100 varsity games wearing the black and gold of Como. She has scored more than 3,000 points in her high school career. After dealing with college recruiters for years, she has committed to study and play at St. John’s University in New York. She now gives interviews with the ease of a seasoned professional.

But what she and her teammates experienced on March 10 was entirely new, fulfilling, rewarding and emotional to the point of joyful tears.

Adams led the Cougars with 35 points in a highly charged, fast-paced and furious game against De La Salle to win the championship. When the final horn blew, she was in a group hug with her teammates and coaches celebrating a 76-71 victory that secured a berth in the state tournament, where every high school basketball player dreams of playing.

The dream transitioning to reality was sinking in at school the day after the big win, as Adams found herself being congratulated all day.

“I was tired and sore, but happy and just sort of in a daze last night and this morning,” she said.

When asked to look back and break down the De La Salle game, she was quick to credit her teammates. “Every single one of us came to play, and we all did everything we could to win the game and get where we are now,” Adams said.

In addition to Andrayah, the starting line-up for the Cougars features junior Asiza Shepherd, sophomores Makayla Van Nett and Raiyne Adams, and freshman Elaina Jones. Adams elaborated on their contributions: “Makayla had a steal and hit a clutch three when we needed it. Elaina was really tough on the boards. Raiyne is tenacious on defense consistently, and Asiza is always strong.”

John Robinson was one of several happy Como educators cheering on the team at the section championship game, and the first to congratulate Adams with a big bear hug. Robinson coached the Lady Cougars for seven years, culminating in Como’s first-ever St. Paul City basketball crown in 2015 before taking over the Como boys team this year.

Gray-Lawson is a former WNBA player, who also played professionally in Europe. Her basketball acumen is extremely high, but the knowledge she passes on to her players is not limited to the X’s and O’s of the game.

Gray-Lawson, called “Coach Lex” by the girls, has instilled and modeled service to her players. She and her staff serve the community and school by supporting the team academically and emotionally. The coaches expect academic responsibility and good citizenship, but also spend time with the girls tutoring and working through challenges, as well as bonding through events and activities filled with jokes and laughter.

This season that time together extended into late March, into the final days of the high school basketball calendar. This season concluded at the state tournament, a destination that transformed dreams and belief into reality and pride. Pride for the team, and pride for the Como Park High School community.

Eric Erickson is a social studies teacher at Como Park Senior High School and a longtime coach of school and youth sports in St. Paul.