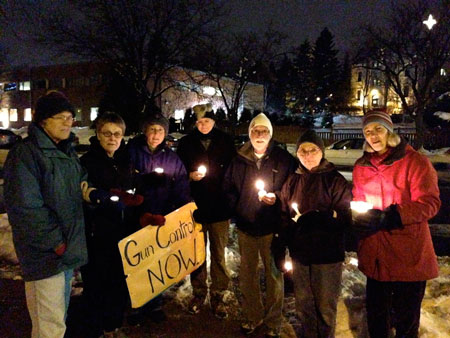 A vigil of one turns into a vigil of 15 on Dec. 14: Anna Dick Gambucci (far right) asked a passerby to take this photo with her iPhone as she stood with neighbors in a gathering to pay honor to the children and adults who died at Sandy Hook Elementary School in Newtown, Conn., earlier that day.

When does a concerned citizen become a committed activist?

For St. Anthony Park resident Anna Dick Gambucci, the turning point came on the afternoon of Dec. 14. She was sitting in a car after lunch that day when she heard the initial reports of the deadly shooting at a Connecticut grade school that had claimed the lives of 26 children and teachers.

“I felt as if the wind were knocked out of me,” she says. “I started crying.”

A former high school choir teacher and the mother of two students at St. Anthony Park Elementary School, Gambucci began calling and emailing friends and local government officials. She was looking for a public demonstration, a vigil, some way of expressing the enormous grief she felt.

When responses were slow in coming, she took an extraordinary step. At 4:30 that afternoon, she posted to the St. Anthony Park list- serv, SAPark@yahoogroups.com, the following message: “I may just be a vigil of 1, but I’m bringing a candle and a sign … to the corner of Carter & Como tonight in front of the SAP library. I’ll be there from 6:00-7:30. Join me for a few minutes if you happen to be free and feel compelled.”

Gambucci recounts what happened next: “I went downstairs and made a homemade sign that read, ‘Gun Control Now.’ ” Despite the short notice and the pre- Christmas rush, 15 people showed up for the impromptu demonstration.

Gambucci and some of her fellow participants have worked hard to keep the momentum going since then. She was instrumental in helping organize a community meeting “to strategize our goal of peaceful communities free from gun violence” at Washington High School, 1495 Rice St., on Monday, Feb. 11, from 6 to 8 p.m.

Gambucci says the meeting is being organized by a number of concerned residents and Protect Minnesota, an anti-gun violence group in St. Paul. Gambucci isn’t the only area resident who felt compelled to speak out on the issue of firearms. The City of Falcon Heights is sponsoring a community meeting on gun violence at the Coffee Grounds cafe, 1579 N. Hamline Ave., at 7 p.m. on Tuesday, Jan. 29. Mayor Peter Lindstrom will lead the discussion. In a related development, the City of Falcon Heights is also distributing free gun locks to city residents. Falcon Heights residents are invited to stop by City Hall, 2077 W. Larpenteur Ave., to receive one free lock per household, while supplies last.

Gambucci describes herself as “a community organizer at heart” who has worked on other issues, from creating a park trail in her former suburban home to door knocking in the last election.

“There’s a lot of work to be done,” she says, “but once this [Sandy Hook] shooting happened, I realized maybe [gun control] might be what I [was called] do.”

She is a pacifist who grew up in a Mennonite home and disclaims any special knowledge of firearms, but doesn’t think that should disqualify her on the subject of gun control. “I don’t judge people who own hunting guns,” she says, “but I am someone who is outraged by the massive murder of defenseless children. No longer can we stomach that and simply turn the conversation away.”

Nationally and locally, the Connecticut shootings have brought new vigor to the gun-control movement. Heather Martens, executive director of Protect Minnesota, 2395 W. University Ave., reaches back to the civil rights movement of the ’60s for a comparison.

“The image of those [Sandy Hook] children under fire has galvanized people of conscience,” she says, “like the images of children set upon by dogs and fire hoses galvanized public opinion during the Civil Rights era.”

Martens says her group’s priorities will be straightforward when the issue of gun control is introduced this session at the Minnesota Legislature.

“Top priorities are background checks for all gun purchases, keeping dangerous people from getting weapons in the first place and limiting access to assault weapons and high-capacity ammo clips,” she says. Hamline Law School professor Joseph Olson takes a different view. A board member of the National Rifle Association, Olson calls himself “a spokesman for Minnesota’s 2 million responsible gun owners.” He dismisses the arguments of groups like Protect Minnesota.

“So much that has been suggested has been tried elsewhere [unsuccessfully],” he says. Olson says the NRA will win the latest legislative battle “because the problem is not guns, but A, people who are criminals, and B, people who are crazy.”

As for the tragic litany of attacks from Columbine to Tucson to Aurora, Colo., to December’s shooting in Newtown, Conn.-—a list that has become all too familiar to Americans—Olson has a consistent response: “We know what works. Immediate counter-fire. Doesn’t matter where it comes from.”

Gambucci responds, “More guns beget more death. The NRA is a misguided group and vigilantism is a huge part of the culture of violence.”

Whether the debate centers on self-protection or lethal risks, one of the few areas in which both sides agree is that in the United States there is no shortage of firearms. Because of the patchwork of legal requirements covering gun ownership, statistics on firearms are notoriously difficult to uncover, but estimates are that 270 to 300 million guns are in American homes, which is close to one weapon for every adult resident of the nation. Sadly, some of those weapons become involved in an enormous amount of violence. Although mass shootings like Sandy Hook are what linger in the public mind, a recent report from the Institute of Medicine and the National Research Council implicates firearms in many less heavily publicized deaths. Gun- related murder rates are 20 times higher in the United States than those of other major developed nations, the report noted, and 69 percent of all U.S. homicides in a recent year involved guns. Gambucci hopes that Americans have had enough.

“The last election indicated there is this reawakening consciousness,” she says. “Vigilantism is too much. Let’s be more sensible. Nobody needs semi-automatic weapons. You don’t have to change the minds of the die- hards. You just need to change the laws. That’s where we have a critical mass. We have people who are going to hold the Legislature accountable.”