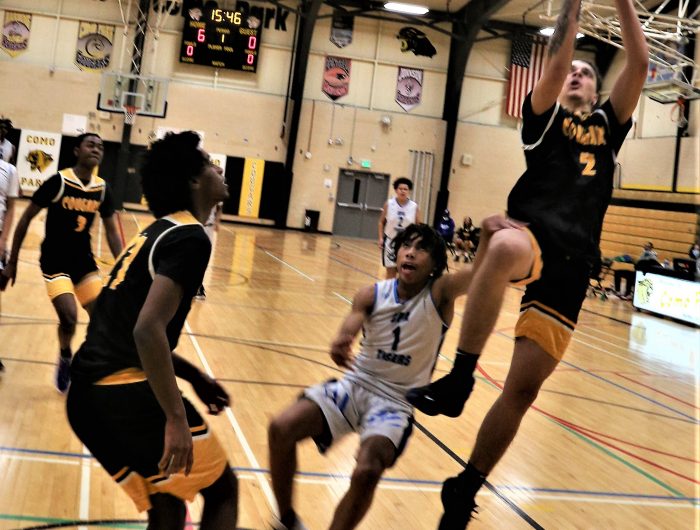 For nine seniors on the Como Park High School varsity boys basketball team, the 2021-2022 season held the promise of a turnaround.

A core group who formed the Cougars’ starting line-up as sophomores two years ago experienced a winless season under then first-year head coach Donnell Gibson. As juniors during Gibson’s second season, they won a total of two games and possessed a career varsity record of 2-37.

But there was reason for hope. The boys had put in the work, grown up, improved their skills and kept believing that sticking together could produce wins during their senior season.

The Cougars came through with a remarkable turnaround that turned heads across the city, posting an overall regular season record of 15-9. In St. Paul City competition, Como finished in 2nd place with a conference record of 10-2 — the highest conference finish for boys’ basketball in school history.

Gibson set out to build a program that would take pride in hustle plays and unselfish basketball. Even when the wins weren’t happening, his demeanor stayed the same: upbeat, encouraging and committed to helping each player develop on and off the court.

“All the personalities made this group fun to coach,” Gibson said. “Even through all the ups and downs. All of it was special. Coming together, it’s just like music.

“We saw little pieces of what we could be before this year. We took time when we first started to identify roles, and this was the first year we actually knew what we had and what role guys had to fit in to make it a whole.”

Two leading roles that emerged for the Cougars were played by the dynamic duo of forwards
Donovan Clinton and Amir Plair. They were both three-year starters who experienced the hardship before becoming scoring leaders and fan favorites.

Both players are 6 feet 4 inches with the ability to play above the rim.

Soaring and powerful dunks were a consistent part of their scoring attack. Clinton averaged 21 points per game while Plair complimented the offense with 15 points per game. They were also the team’s top two rebounders.

“Donovan’s a born scorer,” Gibson said. “He realized he’s a scorer and took on the challenge. And Amir will run through a wall for you. He never stops working. Even if he’s not scoring, he picks it up on defense.”

Clinton and Plair were captains who evolved into confident leaders. Teammates trusted them, which allowed everyone else to focus on their own unique contributions for the good of the group.

The core of Clinton, Plair, Kibble, Gibson Jr. and Aarness developed their winning formula through three years of varsity play together.

“We knew what our positions were and how we had to execute on the court,” Kibble said.

With that knowledge and comfort, adding two new pieces was seamless and enhanced the team chemistry. Senior Rayan Taha and junior Levi Nichols transferred into Como this year. They epitomized unselfish contributions and fit right in with the Cougar philosophy of doing the little things.

Nichols drew an average of three charging fouls a game. Getting set on defense and being knocked to the floor by an opponent’s punishing body blow isn’t fun, unless you’re Nichols. He’d smile after the whistle as teammates rushed over to help him up on his feet.

As for Taha, the team calls him their “40-year-old man.” A wise, mature, academic star, he brought consistent cerebral play to the Cougars and enjoyed every minute with his new teammates.

“This team is like a brotherhood,” Taha explained. “Everyone’s so close. I was new to Como but they welcomed me with open arms. I’ve never been on a team like this.”

Other members of the senior class include Fojuan Bennett, Isaiah Lyles and Amanti Landfair. Junior Abdisalan Mohamud will return next year with Nichols, as will sophomore Mason Aarness who is the Cougars’ best three-point shooter and has been with the team since he was an eighth grader.

The Cougars break every huddle by saying, “Family.” They became one by sticking together.

“It was tough losing when we were young,” Plair said. “It was hard to be mentally strong. Lots of people were talking bad about us, but we learned how to fight through adversity. We wouldn’t ever quit.”