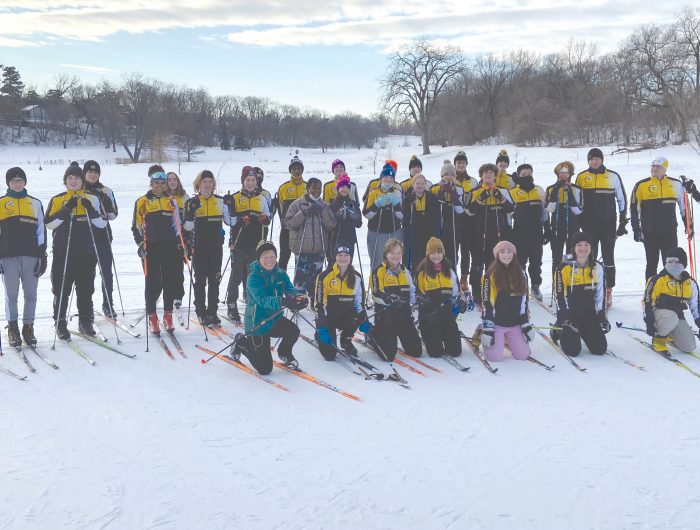 While few states offer Nordic skiing as a high school sport, Minnesota is obviously a fitting location with a Nordic skiing culture.

But the number of high schools running varsity programs is relatively low compared to other winter sports.

While basketball has over 400 teams for each gender and four enrollment classes in the Minnesota State High School League, Nordic skiing only has 97 school programs and no enrollment distinctions for competition.

The Como Park Cougars are proud of their ability to consistently participate in a rugged winter sport, and from what the coaches have observed, they’re proud to be one of the more ethnically diverse programs in the state.

Como head coach Sasha Van Voorhis and assistant coach Dylan Adair began this season with 43 student athletes on the roster. A long dryland training period before the snow came, followed by stints of extreme cold, caused a few newcomers to reevaluate their decision. But 34 Cougars (18 girls and 16 boys) persevered for a rewarding Nordic skiing experience.

“The culture is welcoming, fun and revolves around support and team building,” Adair said. “We try to find a balance with the new skiers and keep them committed so they can develop skills and grow into higher level races.”

To facilitate individual growth, the coaches organize athletes into beginner, intermediate and varsity training groups while still incorporating collaboration. Everyone is together for stretching, workouts and waxing skis. Varsity skiers lead by example and provide tutorials.

The diversity of the Como team has dual meaning. It’s multicultural and it’s extremely varied relative to experience levels and skill sets. Bringing all the elements together and seeing what develops is the fun part.

Junior Alexander Le is of Vietnamese descent and had never skied before this winter. A strong JROTC cadet, Le won the team’s pull-up contest in dryland training. However, balance on skis was initially challenging.

“In the beginning, I fell about once every few minutes,” Le said. “I didn’t feel any frustration at all. If I fell, I’d just get up and start skiing again.”

Junior Gael Manzi grew up in Africa, moving from Burundi to St. Paul four years ago. He was the varsity goalkeeper for the Como boys’ soccer team last fall. This winter he decided to become a Nordic skier.

“In all my four years in Minnesota, I never spent more than two hours outside total,” Manzi said. “The cold is very crazy, but the skiing is fun when you get the hang of it.”

Manzi and Le are getting the hang of it. They both ended the season training with Como’s intermediate group.

Sophomore Wah Soe was born in a Karen refugee camp in Thailand. His migration to Minnesota led to dynamic experiences, the most recent being how to ski and how to dress for it.

“The appropriate gear generous people secured for him helped,” Adair said. “He was humbled and grateful, stayed committed all season and fought through some cold sessions.”

Freshman Genevieve DeGaetano was another novice skier when the season began. Adair described her as extremely determined, evidenced by the successful completion of her first 5K loop in the last junior varsity race of the season.

“She was the last one across the finish line,” Adair explained. “Genevieve has an internal engine that just keeps going with the will power and self-esteem to not care what others think.”

The same determination and spirit can be seen with the experienced end of the Cougars roster. Senior captain Saylor Landrum leads the girls’ team that she’s been a part of since seventh grade. She earned all-conference honorable mention five times and continued to become faster through the years, concluding her career by qualifying for the state meet.

“I thought it was fun to be around the older kids back then and be part of the team,” Landrum said. “We had a few middle schoolers on the team with us this year. It’s fun for me to work with them because I like giving back the coaching I’ve picked up over the years.”

“Skiing has always been my favorite sport,” Finlay said. “I’ve enjoyed seeing my improvement over the years, and to see all my teammates improve too.”

From beginners to varsity stars and all levels in between—there’s support for any kind of Como Cougar skier.