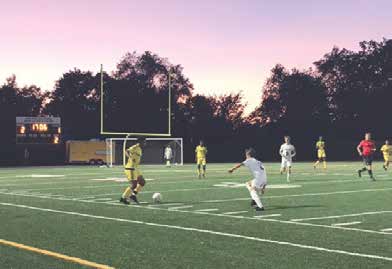 The Minnesota State High School League (MSHSL) took on the unenviable task last month of determining how to proceed with athletic participation amid the COVID-19 pandemic.

On Aug. 4, days after Minnesota Gov. Tim Walz released guidelines for reopening schools, the MSHSL Board of Directors voted on if, how and when to conduct athletic seasons for the 2020-2021 school year.

With a variety of strong opinions from communities across the state, various levels of infection rates and differing beliefs about the virus and its spread, any decision was bound to be met with both cheers and jeers.

For Como student athletes, who already knew they and their St. Paul Public School peers wouldn’t be returning to in-person classes, there was joyful surprise in learning that a plan to play sports was in place. That plan, as of now, includes running a number of fall sports now but moving football and girls volleyball to spring of 2021.

“I wasn’t expecting to have the season. I was excited to hear the decision and be able to play the game that we all love,” Iragaba said.

“I’m happy to have my senior year playing with my brothers,” echoed Kyaw Myint Oo.

Senior Anna Weins said voluntary summer workouts for the girls soccer team have been productive and fun, but she also feared the momentum might end.

“I had a feeling the season was going to be canceled or at least pushed back until the spring or summer if necessary,” Weins said. “So, I was definitely surprised when I heard that the state high school league was allowing the soccer season to happen this fall.”

The soccer season will be scaled back with restrictions on travel. Games will be limited to a maximum of two per week, only against local opponents. Also, the season is being cut which means for Cougar teams that they’ll play a 10 or 11 game conference schedule instead of the standard 16-game regular season which includes non-conference opponents.

A wait and see approach is being taken regarding all section and state tournaments with tentative plans subject to change.

Senior Emmanuel Molinos Lopez, from the boys team said, “I think that the plan the state high school league mapped out is pretty good. Should the plan work out, the season should be a good one.”

Beyond mapping out schedules, the priority issue of public health is omnipresent. The MSHSL stated, “The first week of practice should focus on implementing effective protocols and routines for pre-participation screenings, effective social distancing, compliance with all health recommendations, establishment of pod limits of 25 or less, and additional actions that mitigate the spread of disease and enhance safety of students and coaches.”

Those protocols were already in place during voluntary summer workouts, but were being intensely reinforced for all fall sports that started on Aug. 17: boys and girls cross-country running, girls tennis, and girls swimming in addition to soccer.

After much debate and narrow voting margins, the MSHSL moved football and volleyball to the spring in what will become a special sports calendar for 2020-2021 that actually includes four seasons.

If the fall is successful, the winter sports season would run between November and early March with all the usual offerings—Nordic skiing, basketball, wrestling, gymnastics and boys swimming at Como—to be followed by football and volleyball in a spring season from mid-March through mid-May.

The traditional spring sports–baseball, softball, track and field, golf and boys tennis at Como—actually would be held during “summer” from mid-May until early July.

Got it? It’s new. It’s confusing. It’s exciting. It’s fluid. Extremely fluid. But it’s a plan of fresh ideas that gives everyone hope.

Como football coach Kirby Scull is intrigued by the idea of inviting soccer players and cross-country runners to give football a try in the spring. Meanwhile, they’ll keep running voluntary trainings.

“We will for sure be having workouts and practices this fall,” Scull said. “The players that are comfortable coming to practice need that outlet. We will probably be having a couple practices a week, keeping them productive and fun, not a grind.”

Volleyball players can have socially distanced sessions this fall, as well. Senior Hannah Hausman is thankful for the opportunity.

“As I think about it, I’m not very concerned about this season change,” Hausman said. “It gives us more time to prepare, it is a safer option, and we will have more time throughout the school year to get the word out and expand our team. It may even allow for some fun new additions of other Como athletes interested in volleyball.”

As for spectators, school and state guidelines are still being set. However, the student athletes are aware of priorities, girls soccer player Weins explained.

“Part of the fun and spirit of the game comes from the cheering in the bleachers from our supporters,” Weins said. “But of course, there’s also the big concern/challenge of making sure everyone on the team stays safe and healthy so there isn’t an outbreak that would cause us and our families to get sick, which would also make us unable to play.”