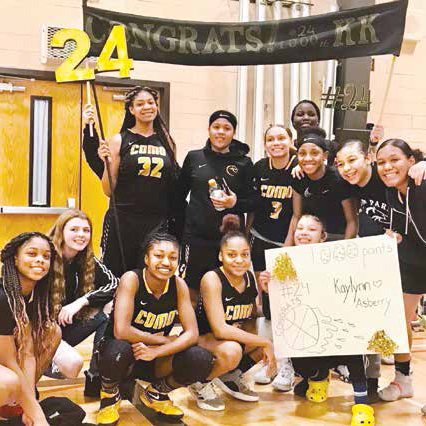 Cougars on a quest for state tourneys

The Cougars have dominated in the St. Paul City Conference, producing a 60-game winning streak in conference play that began in 2015. They recently gained their sixth consecutive conference title.

Winning the section tournament to qualify for state has been more elusive. Como’s first and only state tournament appearance was in 2016. This year’s young team is hungry to get back.

Reaching 1,000 points in a high school career is rare. To do it as a sophomore is extra special. Asberry and Porter have been starters for Como Park since eighth grade (along with James) when they attended Murray.

Asberry and Porter lead an impressive offense that is fast-paced and has excellent ball movement to create quality looks at the basket. Both girls excel as three-point shooters and the team’s defense frequently creates turnovers which Como converts into fast break points.

Meanwhile, the Cougars have a deep bench that allows the coaches to keep players fresh, which enhances speed, rebounding and even three-point shooting—depending on the situation.

Linda Mitchell and JaShawna Baker are the team’s two seniors. Juniors include Demya Riley, Jaylen Smith and Abang Cham. Makayla Holten is another talented sophomore and two freshmen contributors are Janayia Anderson and Kayla James. (Freshman Shania Nichols was all-conference as an eighth-grader but is out this year after ACL knee surgery.)

One of the team’s greatest assets is the unselfish spirit created by coach Alexis Gray Lawson and her staff. The players realize there is value in every detailed task, whether that be boxing out for rebounds, applying defensive pressure or making the extra pass to a more open teammate.

With that selfless mindset, there’s nothing but joy for the individual scoring accomplishments of Porter and Asberry. The game in which each player reached 1,000 points was a celebration for the whole Como basketball family. Banners and signs from parents in the bleachers morphed into smiles, hugs and team photos following both victories.

With those special moments secured, Como is preparing for the playoffs. To advance through the three-round Section 3 Class AAA Tournament, the Cougars will have to go through a highly-ranked team from Simley, which is currently No. 3 in the state. Como is also ranked in the state’s top ten, sitting at No. 8 as the Bugle went to press.

The Section Final is scheduled March 5. If the Cougars capture the crown and are state-bound, we will let you know. And you can expect another happy team photo in the next Bugle!

Cougar swimmers came through the St. Paul City Conference Meet with many personal bests and a second place conference finish, ahead of rival Central and just behind the Highland Park /SPA squad.

Mason Salverda and Mark Remuto swam legs of relays with combinations of the aforementioned teammates to give Como top-three finishes in each relay race as well.

Every Cougar is trying to shave a second or two off their conference times in order to place top-three at the Section 4A Meet and secure a spot at state.

It will be a formidable task to qualify for state against top suburban competition, but Como kids have done it before, most recently in 2017 and 2018. Junior co-­captain Napierala remembers it well.

“We were excited for those guys when they made it,” he said. “It inspired us to keep putting in the work and try to get there too. We’re going to go out and give it our best.”

The section finals took place on Feb. 21 at St. Catherine University after the Bugle went to press. Check saintpaulsports.org for results, as well as your next Bugle!

Senior Alistair Pattison knows what it’s like to go fast and qualify for a state meet. He did it in track last spring, by the thinnest of margins in the 800 meters. His quest to make the State Nordic Ski Meet met the alternative fate when he was edged out for the final qualifying spot in the highly competitive Section 3 Meet on Feb. 6.

“I’m a little bummed,” Pattison said. “I had a faster time than skiers from other sections who made state. But I guess it all evens out because in track there were some sections where my time wouldn’t have qualified. Win some, lose some.”

High school athletics frequently elicit “state” as a goal. Regardless of reaching it, the competitive journey teaches life lessons that serve student athletes well as they navigate future challenges.