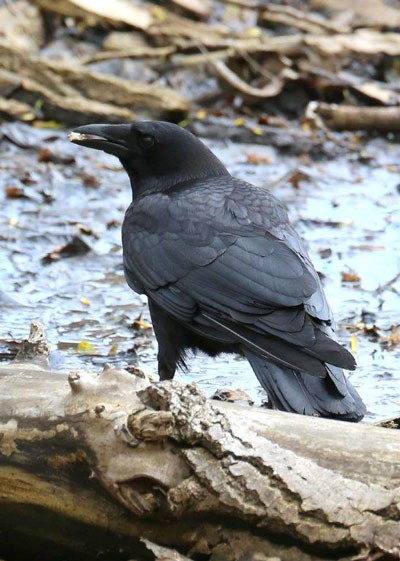 It’s mid-October as I write this, and there is a flock of crows in my neighborhood that are going a bit nuts.

There are usually seven of them hanging out together. They are across the street in Jim’s front yard, pecking away at things on the ground or perching on some of his statuary. In fact, he says one of them frequently gets into his fountain in the backyard and splashes around so much that most of the water spills out.

The crows are often in the street, pecking at leaves. I think they must have some experience with potato chips, because they treat each leaf like it could be a chip, picking it up, turning it over, and nibbling at an edge before dropping it.

They really project a “gangsta attitude,” walking with a certain swagger. Jim watches them strutting up and down and tells me he thinks we’ve got a gang problem in the neighborhood.

Then there are the cawing sessions. When I hear crows calling, I often try to figure out what they’re saying, what’s the code? Four caws are answered by three or five caws in the distance.

Is it the count, the inflection, the volume? Most of the time I think they’re just messing with my head.

But the real impressive action is when the crows start their aerial displays. These guys are like jet fighter pilots, doing quick turns, banking, diving and swerving, all in tight formation. There seems to be some animosity on the part of some of the crows toward others. Something’s going on, but it’s not clear to me what it is.

To try to sort it all out, I began to think about what we know about the social behavior of the American Crow (Corvus brachyrhynchos). Crows often stay in small family groups for most of the year. In fact, it’s common for last year’s offspring to come back to help mom and dad raise this year’s youngsters. But at some point, I would think the folks would try to let the “teen-agers” know that it’s time to go off, find themselves a mate and set up territories of their own. Perhaps that’s what all this chasing and squawking is about.

My wife and I sat at the kitchen table one noon hour watching the crows put on their show, when something flew by that didn’t look quite right. It was a pair of big birds, and one was a crow all right, but it was being chased by something that wasn’t black. What was that?

After a few passes, we realized it was a Cooper’s hawk giving chase. It pursued the crow with every bit as much aggression as the crows had chased each other.

Crows often mob an owl or other predator, trying to drive it away, but I’d never seen a hawk chasing a crow before.

They zoomed across the street with the crow finally settling into Jim’s yard with its buddies. The hawk broke off the pursuit and perched on the peak of the decorative, gabled dormer over Jim’s front door.

I focused my binoculars on the Cooper’s. It had pale yellow eyes and rusty streaking on its breast and sides. It looked to me like a juvenile. The crows seemed unconcerned as the hawk sat on its pinnacle, surveying the yard from above.

Then, as Jean and I watched, the Cooper’s hawk launched itself off the dormer, and in a smooth, level flight, came straight at us, hitting the feeder in front of our kitchen windows. A startled house finch jumped off the feeder, bumped into the window, and was instantly snatched by the hawk. The hawk clutched it with the talons of one foot, flew to the ground about 10 feet away, and prepared to dispatch its prey.

Suddenly, the crows took a renewed interest in what was going on and came swooping in, probably thinking they could steal the finch from the hawk. But no dice. The hawk took off, finch in hand (er, talons), and left the crows behind.

That Cooper’s had spotted the finch from across the street. I’d guess it’s about 100 feet from our kitchen windows to Jim’s front door.

The bird has some pretty amazing visual equipment. And the crows had witnessed the attack on the finch and executed their attempted hijacking almost instantaneously.

Maybe what looks to me like crows acting nutty, actually keeps them poised for action, on the edge, ready to take advantage of any opportunity.

Clay Christensen watches and writes about birds from his home in Lauderdale. He blogs at www.BirdmanofLauderdale.com. His book, The Birdman of Lauderdale, was published in November by Levins Publishing.