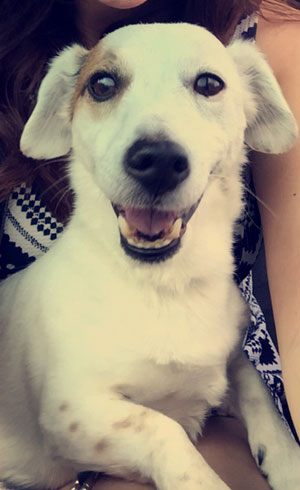 Leo, a 12-year-old Jack Russell terrier, died from wounds after being attacked by a wild animal in his yard on May 9. Photo provided by Laura Manning

Laura Manning was working at her computer about 10:30 p.m. on May 9, when her 12-year-old Jack Russell terrier, Leo, wanted to go outside.

She let him out into the front yard, which is surrounded by an invisible electric fence, and within minutes she heard him yelping.

Manning and her husband, Chris, immediately took him to the after-hours clinic at the University of Minnesota’s Veterinary Medical Center, where they learned had two punctured lungs and several broken ribs. “We had to put him down,” Manning said.

As they were driving home from the clinic, they saw a coyote walking the sidewalk right by the student center on Buford Avenue just a few blocks from their home.

“We went back to the vet and asked [if it could have been a coyote attack],” Manning said. The vet “felt confident that it was.” Leo was covered with what the vet thought was saliva and had been attacked from the stomach area, which indicated the dog was probably flipped over and then attacked.

When the Mannings returned home, they noted that the attacking animal probably came through a flowerbed and into the yard. “We are thinking [the coyote] pulled him out through the [electric] fence and it shocked both of them [because the coyote had the dog in its mouth], and that’s how Leo got away,” Manning said.

Molly Lunaris, St. Paul’s Animal Control supervisor, said she has not received reports of problem coyotes in the St. Anthony Park area, but there have been anecdotal reports of sightings around the St. Paul campus, at the U’s golf course on Larpenteur Avenue, and in Breck Woods, the wooded area off of Fulham Street.

The incident has changed the Manning home. Their second dog, Teddy, will not be let out without someone with him now, she said.

And that’s the advice Lunaris gives for protecting pets from wild animals like coyotes: Install a physical fence to prevent pets from escaping or “being exposed to all harm that can come from animals coming into the yard,” she said, and don’t leave them unattended. “These things can happen in a blink of an eye.”

Even with a physical fence, pets can escape and wildlife can get in. Lunaris suggests planting the fence or mesh under the fence 12 inches into the ground, to prevent animals from digging their way in or out, and using a “coyote roller”: a wire strung with PVC tubing across the top of the fence. Animals that try to jump the fence won’t be able to grip the tubing because it rolls.

St. Paul doesn’t have a leash law for cats, but Lunaris encourages owners to keep cats inside or on a leash and under close watch “to be respectful to neighbors who garden or children who have sandboxes and also to protect the cats from wild animals.”

Also, make sure you aren’t feeding coyotes, Lunaris said. “Their primary prey is rabbits or mice and voles, but they are also scavengers. If you are feeding feral cats and leaving out food, they will go for that. They might even eat feed out of birdfeeders if there’s a lot of feed on the ground. Think about what is in your yard that might be interesting to coyotes. Try to keep the area under birdfeeders cleaned up so you aren’t attracting animals. Also make sure trash cans are secure.”

And if you encounter a coyote, haze: Make noise, bang pots and pans, shout, spray them with a water hose. “Coyotes are typically fearful animals,” Lunaris said. “They may come up in search of food but will run away after being confronted. We encourage people not to run away from coyotes. They are a type of canine and every type of canine is more likely to respond to the trigger of something to chase. Stand your ground, as long as it’s safe to do so.”