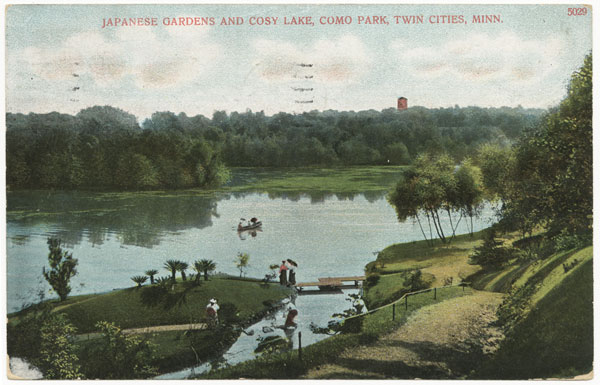 Cozy Lake: A scenic treat — for a while

It was cozy, that’s for sure, tucked away in a little valley, connected to but separate from its much bigger Como Park neighbor, Lake Como.

Cozy Lake was a 10-acre gem in its heyday, “so pretty, so secluded,” in the words of one newspaper writer, with the park’s original Japanese garden on its northern shore.

Like many of this area’s water features in the 19th and early 20th centuries, Cozy oozed away as human activity lowered the water table. Several periods of drought also took their toll.

And, like Lake Como, it had the added disadvantage of being atop a peat bog, which made it all the more difficult to keep water in it.

A Ramsey County atlas of 1859 shows a body of water in the Cozy Lake location, but it doesn’t appear on other maps until nearly the turn of the century. By then the lake, complete with its own Cozy Island, clearly was well established. 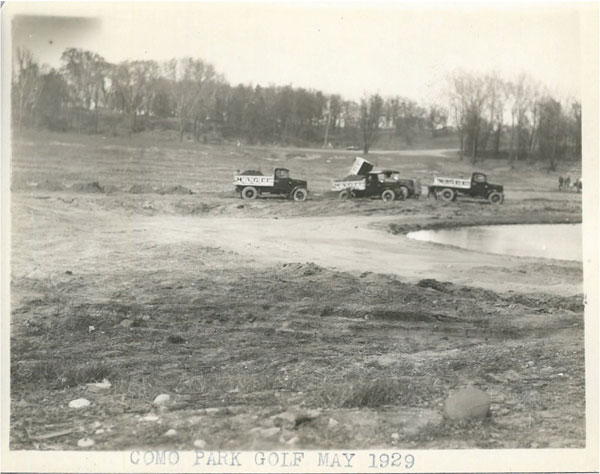 The citizens of St. Paul finally had come to terms with their city’s decision to acquire the acreage for Como Park and money was being spent to develop it as a rural retreat from the unhealthy air and congestion of city life.

Both lakes were shallow to start with and in 1895, Lake Como was dredged to increase its depth from 5 to 15 feet. Steam pumps also were installed to maintain the water levels, a losing battle that would be fought for the next 20 years.

Dr. Rudolph Schiffman was a wealthy St. Paulite and member of the city’s first park board, formed in 1887. He attended the St. Louis World’s Fair in 1904 and was captivated by the elaborate garden installed there by the Empire of Japan.

Upon the close of the fair, Schiffman purchased a large stock of shrubs, plantings and dozens of dwarf trees — some of them said to be 400 years old — from the exhibit. He had them shipped to St. Paul for storage over the winter of 1904-05 and convinced the Japanese landscape gardener who designed the St. Louis exhibit to find a site for them. It turned out to be Como Park. 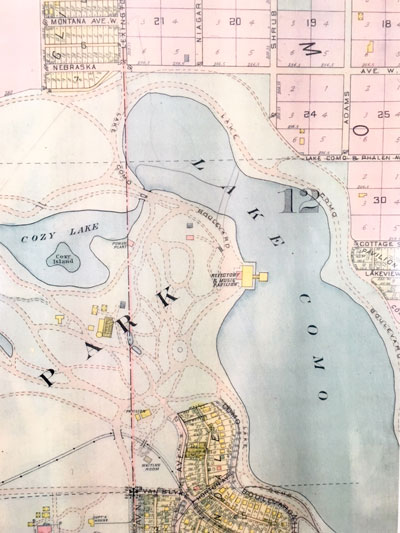 Occupying three acres on a hillside next to Cozy Lake, the garden opened to the public in the summer of 1905. Years later, park superintendent George Nason recalled that the garden included “small artificial ponds, a miniature falls and a cloistered walk that brought long-skirted ladies and their stiff-collared swains across a strange wooden bridge almost hidden by the low hanging boughs of cherry trees.”

But the Japanese garden may have been as short-lived as it was beautiful, for heavy rains and high water were reported to have damaged it in 1906. The plantings would scarcely have had enough time to become established.

By 1909, the St. Paul Pioneer Press advised, “The visitor to Como will avoid the sparse plaything called ambitiously the ‘Japanese garden. …’ ” The cherry trees died, the bridge was torn down and the garden faded from memory.

Meanwhile, maintaining the water level continued to be a problem for both lakes. (A newspaper headline in 1919 on the eve of prohibition: “Land Sakes, Lake Como is Bent on Going Dry Too.”) In 1913 alone, more than 600 million gallons of water were pumped into Lake Como.

Cozy was said to be deteriorating into a “muddy swamp” and city officials had had enough. In 1922, Cozy Lake was dammed off from Lake Como and allowed to go dry.

The northwest arm of Lake Como, too, was abandoned, but it presented a challenge to reclaim. “The bog land . . . seems to absorb fill as fast as it is dumped in,” a newspaper noted.

Both areas were designated for incorporation into the new Como golf course, which opened in 1930. The Cozy Lake acreage is today occupied by the course’s holes no. Nos. 5 through 9. The Japanese garden was in the general area of the ninth green and the forward tee on No. 5.

Three stone lanterns from the original garden now grace the Charlotte Partridge Ordway Japanese Garden on the other side of the valley.

For some years after the course opened, peat fires continued to burn underground in the old Cozy lakebed. It was said that a golfer would occasionally get a “hotfoot” from breaking through the surface.

The name lives on at Cozy’s Pub, the bar and grill in the golf course clubhouse.