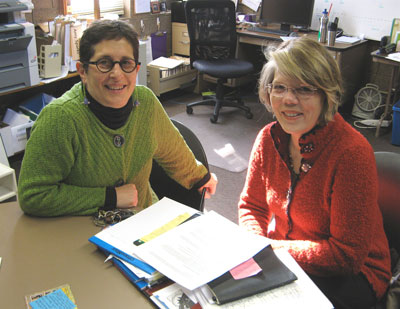 A Creative Enterprise Zone to preserve the unique nature and eclectic mix of businesses in the area centered on Raymond and University avenues is moving closer to becoming reality.

The St. Paul Planning Commission will hold a public hearing on the matter, which ultimately will come before the City Council, on Friday, March 8, in the City Hall/Courthouse.
For decades, light-manufacturing companies, artisans and artists, business-service firms, nonprofits and small businesses have successfully co-existed in the area bounded by Energy Park Drive and I-94 on the north and south and Prior Avenue and the Minneapolis border on the east and west.

“This is a part of the city in which people make things,” said Amy Sparks, executive director of the District 12 St. Anthony Park Community Council. “That takes many forms, but it all requires creativity.”

Speculative development began to move in several years ago, stimulated by the construction of the light-rail line. Starting in 2010, there was growing concern on the part of leaders that the neighborhood’s character would be lost, along with jobs, without a vision for what it could and should be. A task force was formed to address the issues.

One of the galvanizing events was the development of the historic Chittenden & Eastman Building, now the C&E Lofts, at 2410 University Ave. W.

The building had been home to a mix of artists, artisans and creative businesses ranging from videographers to publishers. Neighborhood leaders had hoped that that they would be able to remain following the building’s redevelopment, but that didn’t happen. At the same time, some small businesses left the area during the disruption caused by light-rail construction.

Housing has been sprouting up along the light-rail line and that’s a good thing, says Catherine Reid Day, task force chair. But she contends it shouldn’t come in at the expense of the businesses that are the heart of the economic vitality of the neighborhood.

What gradually emerged was a consensus that a Creative Enterprise Zone, unique within the City of St. Paul, should be established. This would be done by amending the District 12 St. Anthony Park Community Plan within the city’s Comprehensive Plan. In addition to designating the zone, the proposed language would identify strategies for supporting a mix of creative industries in the area.

If the zone is approved, said Reid Day, it will be an endorsement of the value of preserving the character of the area. “The Comprehensive Plan isn’t something that’s binding, but being included in it would give credibility to the task force’s vision and serve as a rallying point for getting the community behind it.”

Creative Enterprise Zone status could be used to encourage development that is appropriate to the values and vision of the community, she added.

The Creative Enterprise Zone task force has begun attracting funding to support its activities, most recently a $15,000 grant from the Trillium Family Foundation and $10,000 from an anonymous source.

One of the things the group is doing to build a sense of community within the Creative Enterprise Zone is holding “Give & Take” sessions, most recently on Feb. 21 at University Enterprise Laboratories. More are being planned.

The public hearing on the measure is scheduled for 8:30 a.m., Friday, March 8, in Room 40 of the City Hall/Courthouse, 15 West Kellogg Blvd.

To learn more, go to creativeenterprisezone.org.

Roger Bergerson writes about history and Bugle-area news from his home in the Como Park neighborhood.