Daisy has a baby 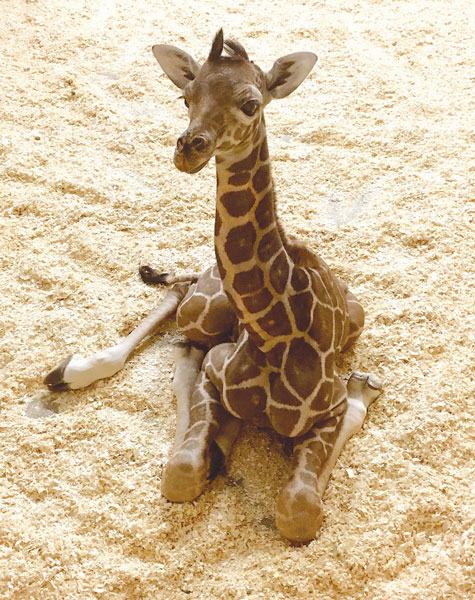 Daisy, a female giraffe, recently gave birth to a female at the
Como Zoo. Photo supplied by Como Zoo.

Daisy, one of Como Zoo’s giraffes, is a new mom!

She gave birth on the morning of Oct. 2 to a long-legged female who came into the world 5 feet, 8 inches, and 120 pounds, according to zoo spokesman Matt Reinartz.

The new baby female is the 22nd giraffe birth at Como Park Zoo and Conservatory in the last 24 years, according to the Zoo. Como’s current herd consists of Daisy (mother of eight), Skeeter (the father), sibling Clover and the yet-to-be named calf. This is Skeeter’s sixth offspring, five of which have been female.

Some giraffe stats: They are the tallest land-living animal, towering upward of 18 feet with prehensile tongues up to a foot-and-a-half long. A giraffe’s gestation period lasts14 to 15 months. Like human fingerprints, the markings or spots of a giraffe’s coat are unique to each individual. Reticulated giraffes are native to the dry savannahs and open woodlands of sub-Saharan Africa.

In other news, Como Zoo is continuing construction of Como Harbor, its new seals and sea lions exhibit that is shooting for a 2019 opening. Lancer Hospitality recently donated $1 million toward the exhibit’s funding, according to a Pioneer Press report.

The new exhibit will provide year-round indoor and outdoor use that will meet or exceed all regulatory and animal-care requirements, according to Zoo officials.

In 2017, the Minnesota Legislature awarded a $15 million bonding appropriation for the asset preservation of the Seal and Sea Lion Habitat. Como Friends, the nonprofit partner of Como  Zoo, is expected to raise the remaining $5 million needed for the new Como Harbor habitat.

Como Zoo’s seals and sea lions exhibit has been a fixture for more than 60 years. The Sparky Show, which began in 1956, remains one of Como’s most popular attractions with nearly 500,000 students from across the region taking part in the show annually.