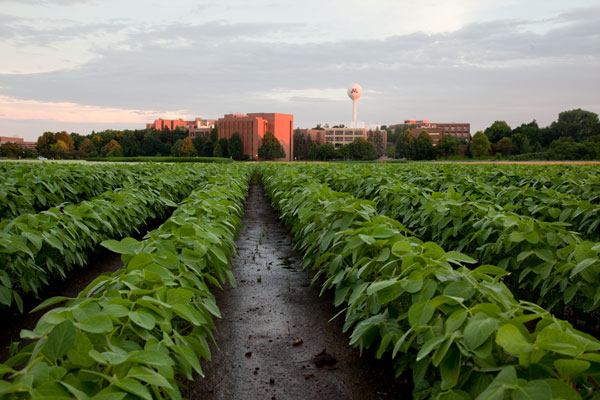 Test fields on the St. Paul campus, by David Hansen: “Campus scenes can be pretty routine to shoot, and boring to look at,” says Hansen. “Fortunately I live right next to the St. Paul campus, so if there is unusual lighting or weather conditions I can just cross the street and hope to set up some unique images. I was on the way to the grocery store when I saw this out the car window. I ran back and got my camera and tripod and shot as long as the sun was on the campus buildings. I love the wet, rich soil and the water droplets on the soybean leaves. And the “M” on the water tower forever brands the shot. Getting U of M credit for photos is sometimes a challenge, so if I can work a U of M logo on a hat, shirt, sign or vehicle into the photo then I’ve done my job.”

A boastful comment made more than four decades ago set David Hansen on a career path that will continue to impact the stories of Minnesota agricultural research for years to come.

Hansen, who has been making photographs for the University of Minnesota since 1974, recently announced his retirement.

As a U of M photojournalism major, Hansen, then a senior, figured he had taken all the photography classes available. And supposedly he did — at least those offered on the Minneapolis campus. A chance encounter with Don Breneman, a U of M Extension photographer and instructor at the time, challenged Hansen’s assumption.

“I was reading a technical photography book [while at his on-campus winter term job], and a guy came up and asked me some questions about photography,” Hansen recalls. “I also told him I knew a lot about photography and that I had taken every photography class at the U. The guy looked at me and said, ‘No, you haven’t. You haven’t taken my class.’ ” 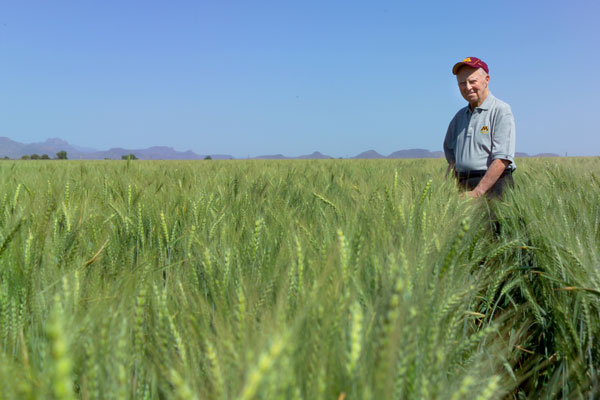 Norman Borlaug, by David Hansen: “Norman Borlaug accomplished more than anyone I’ve ever known or read about. I photographed him in Mexico when he was 92 years old and still an activist to improve the world’s food supply. He was a close personal friend of my father, who taught him forestry when Norm was an undergrad on the St. Paul campus. [In this photo,] I wanted to show Norm with wheat, so we found a location that had been desert before he built the Yaqui Valley research station where he developed his ‘shuttle breeding’ concept. It is now productive as far as the eye can see, all the way to the mountains in the distance.”

The man discussing photography with Hansen was Breneman, who was on staff in the ag journalism department on the St. Paul campus. He was teaching close-up photography to agronomy students. His class at the time was full, yet he made room for Hansen. Something clicked for the soon-to-graduate college student as he attended the class. He enjoyed focusing his camera lens on these new subjects revolving around scientific discovery.

“It was the luckiest thing in my life,” Hansen recalls, of ending up in Breneman’s class. As Breneman observed Hansen’s talent, he soon realized that Hansen did know a lot about photography, and he asked Hansen to help with class and eventually work as an Extension photographer. Over the next decade, Hansen evolved into a full-time photographer for the U of M Agricultural Experiment Station and completed his master’s degree in science journalism. 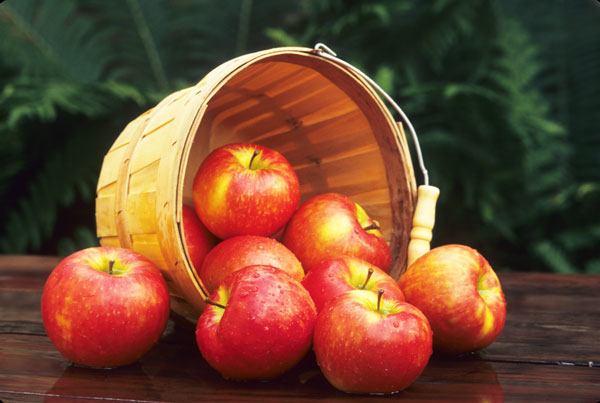 The Honeycrisp apple, by David Hansen: “This is my most used photo of Honeycrisp apples, shot in 1993 in my back yard. I put the arrangement on a little picnic table I’d built for [his daughter and son] Britta and Kell, and then I wet the whole thing down, mainly to make the dry, gray wood darker. To get a natural looking background, darker than the arrangement, I moved the table near a bed of ferns. Keep in mind that this was before any consumer had tasted or heard of Honeycrisp.”

Though you might not know Hansen by name, chances are you will know his photography. From apples to small grains, from climatology to forest ecology, from animal nutrition to plant disease — those artful, colorful images featured in university publications, posters and exhibits were made by Hansen.

“My goal has always been to help people gain a better understanding of land-grant university science and its contributions to everyday life,” he says.

Hansen also has documented thousands of research projects and shot photos in every county in Minnesota. He also has worked on university projects in numerous countries, including Morocco, Poland, Israel, Chile, New Zealand, Kenya and Tanzania. He has taught numerous visual communication workshops in Pakistan and India, too.

Along with making photos, Hansen has had the task of managing and distributing them. His office contains file cabinets full of black and white negatives and color slides dating back to 1950, plus his digital images. Over the years, he has also made time to exhibit his photography at university events, agriculture and horticulture shows, and at public galleries and event centers.

When asked what his favorite photos are, Hansen is hard-pressed to name any.

“I like shooting everything. I have no favorites,” he says. “There is great variety here. Minnesota has so many unique places.” 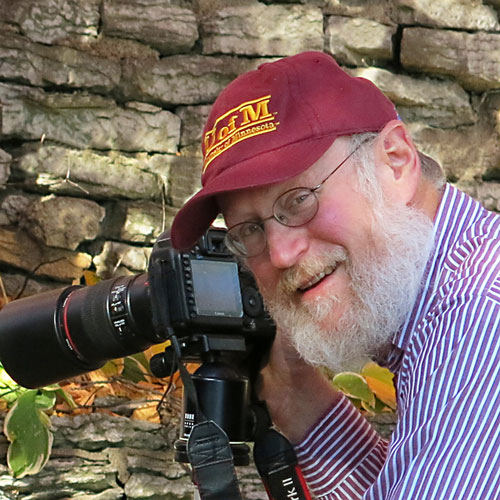 Permission to reprint from The Farmer.