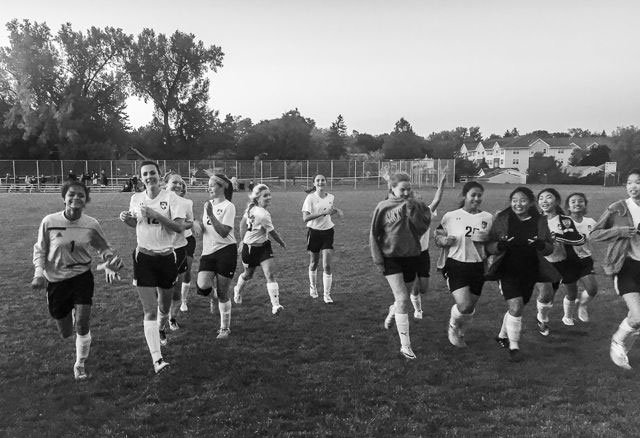 Coach Steve Cox snapped this photo of his Lady Cougars’ Soccer team during their “victory run” after defeating Highland Park 2-1 at Como on Oct. 2.

Every season, in every sport, high school varsity coaches face the challenge of trying to replace the senior leaders who graduated.

For Como girls soccer coach Steve Cox, the challenge was significant as he entered the 2015 season, his 24th leading the Lady Cougars.

Three other dedicated seniors, with soccer skills and smarts, also entered college this fall, leaving big shoes to fill. While daunting, this situation is common to successful and balanced programs.

What was unexpected for the Lady Cougars, was losing the 2015 team’s co-captain, senior Vanessa Acosta. As a junior, Acosta led the 2014 team in scoring with 12 goals and 6 assists. In her first game as cocaptain, Acosta tore her ACL, requiring surgery and abruptly ending her senior season.

The loss of Acosta was heartbreaking, Cox conceded, both for her and for her teammates. Acosta’s friend and fellow co-captain, Brianna Menssen, said, “Losing her as a teammate was terrible. Everyone was incredibly sad when we found out she was out for the season.”

So where does the story of the 2015 Como girls soccer team go from that point?

It goes through highs and lows, more injuries and obstacles, life lessons, and a memorable journey yielding 8 wins, 5 losses and 2 ties as the Bugle went to press.

Given the backstory, the record of 8-5-2 seems remarkable. Cox is proud of his girls, who stepped into new roles and worked so hard.

“The team is a mixture of returning varsity athletes, improved junior varsity athletes and incoming ninth-graders,” he said. “Each game, another player steps up to play her best game of the season.”

The diversity of the team exists on a couple of levels, including age. Depth was not something the Cougars were certain of having, but a talented freshman class that played together at Murray Middle School has made an impact with three players in the starting line-up and a fourth splitting time as the goalkeeper.

Combining the freshmen with an even split of sophomores and juniors in the back line and midfield, led to an organized defense. Menssen’s 14 goals, and fellow senior Angie Martin’s six goals and six assists spearheaded the offense.

Cox, grateful for every player’s contributions, marveled at the depth he was able to use. “Our depth has been

“Our depth has been crucial to our success as players have been asked to fill in where the team has needed them and excelled,” he said.

Two players who helped fill the greatest need were freshman Cece Wulff and sophomore Alexa Walters. Together, they shared goalkeeping responsibilities, after training together in the off-season. Both are still developing technique, but as selfless athletes, they came through with big saves to help the team succeed.

Depth, along with determination, produced significant and historic results. Como has played Section 4A opponent Mounds Park Academy for years. After years of losses to them, a 1-1 tie in the season opener was promising.

The peak moment of the season, when the team’s effort came together with improved skills from all positions and players on the field, was at home against Highland Park. The city rivalry had been in Highland’s favor for a long time. Menssen and the other seniors had never beat Highland in their careers.

That changed after Menssen’s goals propelled Como to a 2-1 win on a Friday evening.“We all went out there with the mentality that we could win, and as a team we all gave it our all to finally beat Highland!” she said.

The jog to cool down after the game had a different feel that day. It was a “victory run,” shared by a special group of girls that competed for Como with pride.