A St. Paul developer is continuing to move ahead on an estimate $13 million senior housing complex in Falcon Heights.

Called “The Hendrickson,” the project will feature 66 market-rate apartment rental units for people who are at least age 55, don’t need assisted medical services but want a living setting with on-site social activities, said Peter Austin, vice-president of finance at Kelly Brothers Ltd., the project’s developer. The project will also include one guest unit. 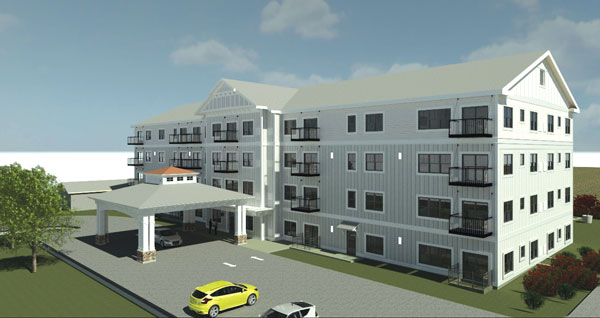 The four-story, L-shaped building at the former Hermes Garden Center site on Larpenteur Avenue will include five studio apartments with the rest a mix of one- and two-bedroom units, Austin said. Monthly rents will range from $1,200 to $2,500. The building will feature, among other things, a multi-purpose community room, private dining room, wellness room, library, beauty salon, underground parking, outdoor patio area, and an expansive back porch on the southern end of the building that will overlook the University of Minnesota farm fields.

“It’s a great location,” said Austin, also a resident of St. Anthony Park.  “We designed the L-shaped building to take advantage of views south and west,” as well as “try to make it respectful of the history of the site.” The Hendrickson is named after W. Hendrickson, one of the early settlers of the area. Hendrickson’s 112-acre farm was in the southwest corner of Larpenteur and Snelling avenues in what was called Rose Town, Austin said.

Five years ago, the Pohlad Family Foundation bought the 3.4-acre Hermes site, envisioning the location suitable to be developed into a “healthy-living campus” that would have an urban farm and organic food distribution center, as well as an affordable housing project.

The former came to fruition in October 2015 with the opening of the Good Acre, a hub that offers warehouse space to immigrant and low-income farmers, cooking classes and serves as Community-Supported Agriculture {CSA} that offers weekly shares of organic vegetables during the summer and fall.

However, the housing component of the “healthy-living campus” took a slight turn. Common Bond Communities of St. Paul originally planned to develop and manage the housing project but had to drop out when it failed to get funding for it. That’s when Kelly Brothers’ contracted to take on a market-rate housing project on the remaining piece of the Hermes site.

Austin said the Hendrickson is in a very senior-friendly location with the development near the Saint Anthony Park Area Seniors and the Como Falcon Heights Block Nurse programs, new Bell Museum and Planetarium and the metro bus stop for Route 61 that takes riders to both downtown St. Paul and Minneapolis.

The Hendrickson isn’t Kelly Brothers first senior housing development.  It has built similar ones, including the 92-unit Boulders in White Bear Lake, Westview Apartments in Forest Lake, Ashwood Apartments in North Branch and Highlands at River Road, a 69-unit complex that opened in 2016 in Highland Park.