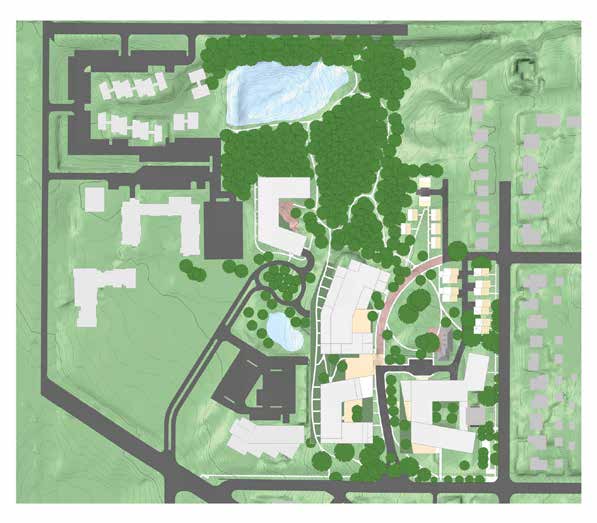 Meanwhile, preliminary plans are also designed to maxi­mize green space and preserve much of the area known as the Breck Woods, weeding out invasive trees and restore the natural ecology, Master Properties representatives said. The site plan includes walking trails and positioning buildings to take advantage of the hilly landscape to reduce the visual and traffic impacts on the existing neighborhood. For example, most new residents of the proposed development would have underground parking tucked into the hillside from an entrance off of Como Avenue.

“We want to preserve the Breck Woods,” said Don Gerberding, a partner at Master Properties, who noted the city of Lauderdale has recognized the forested area as a separate zoning district that will be preserved forever.

While many people attending the meeting applauded Gerberding’s comment, several other audience members raised concerns about the proposed height of some buildings (one would be six stories) and how heavy development could affect the neighborhood.

“I am concerned about the safety of children in the neighborhood,” said St. Anthony Park resident Meri Hauge.

Max Heitzmann, president of Master Properties, said the development team will continue to work with the community task force. He expects more definite plans to gel in the fall and groundbreaking for the project to possibly begin in mid-2020.

For past six months, the developer team has been working with a task force formed by the St. Anthony Park District 12 Community Council to refine the redevelopment plans for the current Lower Campus of Luther Seminary.

Luther Seminary has slowly been selling under-used portions of its property for several years.