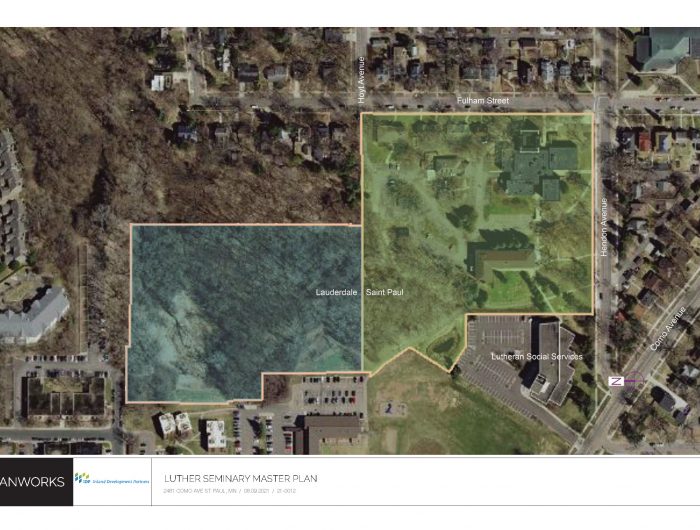 Upwards of 600 to 800 housing units could be built on a 15.5-acre parcel on the western end of the Luther Seminary campus that the educational institution has for sale.

That’s the broad vision that Wayzata-based Inland Development Partners unveiled for the site at a neighborhood open house on Aug. 10 at the Seminary’s Olson Campus Center. With that being the first in a series of open house meetings to solicit public input, the preliminary plan is likely to be controversial.

Although specific, detailed plans are months away, Inland officials envision their firm serving as the master developer coordinating the installation of utilities and other infrastructure to serve a mix of  senior co-op housing and market rate and affordable apartments for families, seniors and other adults.

Preliminary plans also include preserving much of the 6.4-acre parcel known as the Breck Woods, a natural area that scores of resi­dents have insisted previously should be protected.

Steve Schwanke, a partner at Inland, said in a separate interview that the seminary site is a desirable location for a mix of new housing in the St. Anthony Park neighborhood at a time when there is a dearth of prime redevelopment sites.

“The Luther Seminary site is in a great neighborhood” with attractive amenities including its retail downtown area off of Como Avenue, said Schwanke, whose company specializes in redeveloping properties. “It would allow us to bring to the neighborhood an additional diversity of housing.”

Under the preliminary plan, the overall residential project might include: up to 400 units of market rate multifamily apartments spread over two buildings; up to 100 units of affordable housing.

Currently, Luther Seminary is in a 90-day exploratory period with IDP.

“Based on IDP’s findings, the Luther Seminary Board will decide in October whether to pursue a full contract with IDP to do the infrastructure required to sell the property,” the Seminary said in a statement.

Meanwhile, the Seminary has sought steadfastly for the past three years to sell the 15.5-acre section of its campus.

Seminary President Robin Steinke stated, “We strongly feel the lower campus is a historic opportunity in the heart of the metropolitan area for additional mixed-use housing, including affordable housing, and are working with IDP as we pursue the sale of the lower campus.”

Although the latest Luther Seminary property development proposal is at least several months from getting firmed up, and is slated to undergo extensive community review, the specter of a large-scale project has garnered at least some residents’ disapproval.

“The cumulative projects of 600-800 units is disrespectful to this neighborhood,” Cynthia ­Ahlgren, a St. Anthony Park resident and member of the group Friends of Breck Wood, said in an email to the Bugle.

“I do not want to see us treated by developers the way that Dinkytown and Uptown and even eastern Prospect Park are being treated. Their authentic character is being swallowed up.

“But when the consensus is that we would like to see greater density, or senior housing, or affordable housing built on the seminary campus, how many intend that to mean 600-800 units? Or even 450 units?”

Whatever happens, the Semi­nary’s partnership with Inland Development comes after its prior contract with Master Properties expired this past winter amidst that developer’s having suffered numerous delays with its proposed project during the COVID-19 pandemic.

After Master Properties’ pur­chase agreement with the Seminary lapsed, the religious institution was free to entertain talks with other developers about the campus redevelopment.

The Seminary said that teaming with Inland Development gives it a firm “with decades of real estate development experience that will be able to focus on the steps needed to obtain community and government support, create individual building sites . . . and support Luther Seminary’s efforts to sell those parcels to the entities that will build on them.”

“Our existing relationships in this category along with our experience working on large, complex projects with multiple entities will serve Luther Seminary well,” IDP partner Kent Carlson notably said in an earlier statement.

Luther Seminary has slowly been selling underused portions of its property for several years as its campus needs have diminished due to changing program needs. Not all students live on campus anymore nor are all of them maintaining full-time class schedules.

In 2014, the seminary sold five apartment buildings on Eustis Street to Greenway Village. Senior housing developer Ecumen bought 1.6 acres at Luther Place and Como Avenue in 2015 and built Zvago, a 49-unit co-op. HealthPartners purchased 4.5 acres of land across from its Como Avenue building in 2016 to build a replacement clinic.