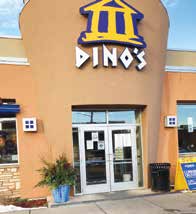 Dino’s Mediterranean Fresh restaurant is asking the Falcon Heights City Council for permission to install a drive-up lane at its restaurant at Snelling and Larpenteur avenues.

The restaurant applied last spring for a drive-through lane with an ordering speaker, then backed off due to the coronavirus pandemic. Currently, Falcon Heights only allows drive-through access for financial institutions, so the city code would have to be amended to allow similar access for restaurants.

Changing customer buying habits now have led the restaurant owners to seek a revised permit, City Administrator Sack Thongvanh told the Bugle. He said he expected the external speaker system for placing orders would be dropped in favor of a simpler external pickup lane.

The pandemic has gotten diners in the habit of ordering online rather than at a window, Thongvanh said, but there’s more demand than ever for external pickup, which the restaurant has been handling by sending staff out to the parking lot to meet drivers.

“People are more willing to go through a drive lane,” he said. He noted that restaurants sending staff outdoors may also be liable for injuries, especially when the streets get icy.

Thongvanh said the challenge for Dino’s is proximity to homes, where residents have contended that a drive-through ordering lane would generate noise and traffic. Specifically, he said the speakers at a typical fast-food restaurant are loud and extend long hours. Thongvanh predicted that neighbors would be less opposed to Dino’s revised request for online orders and drive-up purchases, although vehicle noise may still be an issue.

While the restaurant’s address is on Snelling Avenue, vehicle access is either through the Falcon Crossing shopping district entrance or from the residential Crawford Street.

Two steps are needed for Dino’s to be able to initiate a drive-up lane: An ordinance setting rules for drive-up access at restaurants, followed by issuing a permit for Dino’s.

Thongvanh said he expects the city planning commission to hold a hearing on Dino’s request in December.

Anne Holzman is a freelance writer who covers Falcon Heights and Lauderdale news for the Bugle.